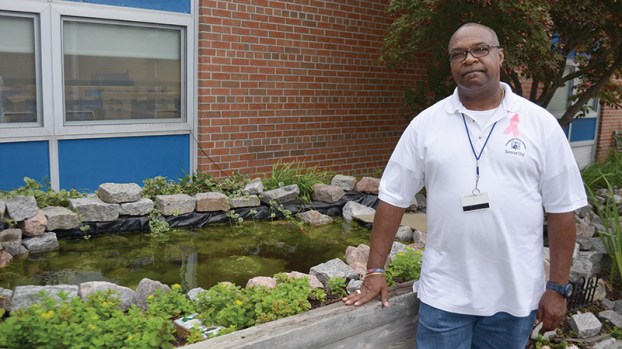 Familiar face in a safe space

This safety and security monitor arrives early each morning to start patrolling the halls, checking door locks and greeting students, while reminding them to tie their shoes and get to class. His own worn tennis shoes reflect years of routine.

Jackson came to Chesapeake Public Schools 15 years ago after leaving his hometown of Boston and a job with Longwood Security at the Boston Conservatory at Berklee College of Music.

“Everybody knows him,” Jones said. “He’s seen a lot of children come and go. He knows your mother, your brother, your sister.”

Jones described Jackson as the first point of contact for parents in difficult circumstances on campus.

He keeps track of suspicious activity on campus, checking cameras and walking around looking for unfamiliar vehicles sitting in the parking lot or individuals whose faces he doesn’t recognize, Jones said.

Once, when a school bus was involved in an accident, Jackson rode with students on bus routes for a time to ease their anxiety, she said.

“He would do the morning and afternoon runs, just to make sure the students felt safe and comfortable,” she said.

When Western Branch Intermediate and other Chesapeake schools were once on lockdown at the end of a school day day as a response to reported activity, Jackson was in front of the school, easing the minds of parents anxious to get their kids, she said.

“He’s a parent whisperer,” she quipped.

Jackson said he makes an effort to show parents respect, and they normally reciprocate the favor.

“People want to be respected, so you’ve got to give them respect,” Jackson said. “I try my best not be rude to anybody.”

This is evident as he talks with students and tries to help them deal with problems they may have at school or home.

“I will do anything for them, and they know that,” Jackson said.

Mya Comissions, an 11-year-old fifth grader, said Jackson is nice, tough and can get things done.

“He will listen to you,” Mya said. “He’s smart, so he’ll probably know how to fix the problem.”
Jackson and the students work together for school cleanup events, and he helps maintain the school courtyard.

The connections he’s made with students go beyond the campus, as graduates and active students will spot him in the street and greet him with a smile.

He said he may not remember all their names, but he definitely remembers their faces.

“It’s hard to get away from them,” Jackson laughed.

A medal of honor

Story by Phyllis Speidell Photos by John H. Sheally II Did you know that the Churchland/Western Branch community was home... read more