James Brooks’ lifelong dream came true on Friday when he graduated with 39 others from the State Police Training Academy during the 128th Basic Session.

“I wanted to be a trooper since I was a little kid,” Brooks said. “I used to roll Matchbox cars around on the floor.”

Brooks has already been a part of law enforcement for close to a decade as a member of the Suffolk Police Department. During his nine years, he was also a part of the Neighborhood Enforcement Team.

“I’m excited doing the things here that I did for Suffolk,” Brooks said. “I like helping others.”

Now that Brooks is finally a part of the State Police, he will relocate to Hampton for his new command. 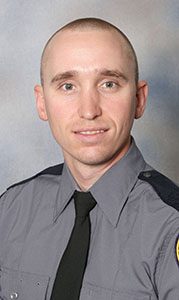 The new command keeps Brooks in Hampton Roads, where he grew up, and he is happy to stay close.

“I’m happy to keep serving the community I grew up in,” Brooks said.

Since Brooks was already part of law enforcement, he only had to be at the State Police Training Academy for eight weeks.

During the training, Brooks went through more than 300 hours of classroom and field instruction in nearly 50 different subjects, including defensive tactics, crime scene investigation, firearms and crisis management.

While the training was mentally and physically exhausting, the hardest part was being away for eight weeks.

“The hardest part, coming from a law enforcement perspective, was being away from my family,” Brooks said. “It was all mental more than anything.”

However, he did admit that the physical aspect was pretty tough.

“The physical aspect was no joke,” Brooks said. “If you weren’t in shape, you wouldn’t make it.”

Those in training ran at least a mile and a half every day along with Crossfit workouts.

During the eight weeks, Brooks made some strong bonds with the other troopers at the academy.

“I had fun shooting and driving, but my fondest memory was the camaraderie you build with everyone. It’s a bond that if you don’t experience it, you don’t understand it,” Brooks said. “If I saw them in five years, we would still have this bond.”

While Brooks serves in Hampton, he hopes to join the K-9 unit.

“The State Police seemed like more opportunities for me, and someday I’m hoping to get into the K-9 unit,” Brooks said.

Brooks will head to Hampton in July and continue with an additional six weeks of field training.