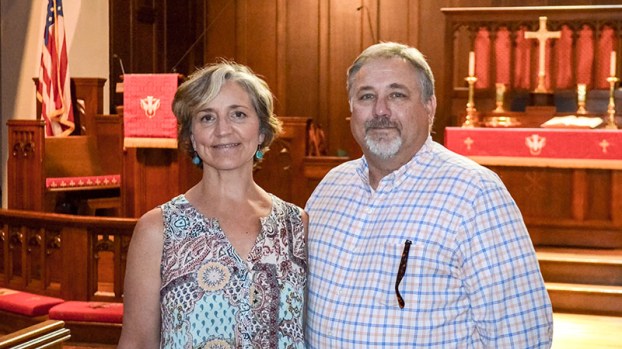 Richard Meiser, the new pastor at Main Street United Methodist Church since July 1, and his wife Colleen Meiser at the church Tuesday morning.

The Rev. Richard Meiser, 55, spent years building relationships and guiding youth to fulfill his calling in life. On July 1, he answered another call from Main Street United Methodist Church.

Meiser became the new pastor of Main Street UMC, filling the vacancy left by the late Rev. Myrtle Frances Hatcher, who passed away on Feb. 8 at the age of 72.

He’s spent the last 16 years in campus ministry between Longwood University in Farmville and Hampden-Sydney College. He provided a safe space for college students to grow in their faith and serve their community while providing mentorship and leadership development, he said.

“Most of the work I did at Hampden-Sydney was with the sports teams,” Meiser said in his office at Main Street UMC. “I served as kind of a chaplain for the baseball team and did Bible studies with the guys who were interested.”

Colleen Meiser, the pastor’s wife of 36 years, sat with him in his office. They’ve raised three children in Sara Seay, 35, Samantha Carpenter, 27, and Seth Meiser, 30. The parents were sitting in a campus ministry building during one of their son’s youth activities years ago when they had the same realization on how Meiser could help youth.

“It’s really hard to say, but it was almost at the same time that we both just sensed it,” Colleen Meiser said.

“I had done several weddings recently that were for recent college graduates and I just really enjoyed working with that age group,” Richard Meiser added. His wife said that he always related well to students that age.

“He loves all people, but I think at that time in his life he was especially connected to that demographic of college-aged students,” she said.

One of the things he was most proud of as a campus minister was helping college students with their “call stories.” He had students with “dreams of being in the pulpit,” he said, and he helped them articulate and pursue their ideas.

“I also helped students understand their vocation and what they were going to do with their lives,” he said. He described this as their “vocational callings.” “That doesn’t mean ministry. It means whatever they’re meant to do.”

Justin Hicks, one of the seniors from his first graduating class between the two schools in 2003, actually fulfilled his calling by filling Meiser’s campus ministry position when he recently left to serve Main Street UMC.

“It’s very fulfilling,” he said. “I feel good about it. Several of my (former) students are now in active ministry.”

He understands that the pull towards ministry requires change, sacrifice and patience. It’s a second career for him, his first lasting from 1982 to 1992 at Newport News Shipbuilding. He said the shipyard was in a transition period when he left his position with a severance package and a desire for God.

He coordinated youth adult ministries at First United Methodist Church Fox Hill in Hampton while he worked at the shipyard. Then, during a midweek service, there was guest preacher who talked about his story of becoming a minster, a story that sounded very similar to Meiser’s circumstances.

“I heard the affirmation from God that ‘yes, ministry is where I’m calling you,’” he said.

His first appointment as a pastor was a multipoint charge in Mecklenburg County that had him preaching at three different churches each Sunday from 1997 to 2002.

“I remember it so well, because I had to record my mileage. I put 19 miles on my vehicle every Sunday morning, and I did all three services in under four hours,” he said. “It was a race, but I remember it fondly.”

Throughout his time in ministry, Meiser has prided himself on countless transformational relationships that have shaped his friends, family, students and worshippers as much as they’ve changed him.

“Both of us come together to understand God’s love better, then express that in tangible ways by serving the community,” he said.

He’s still learning the ropes at Main Street UMC but is excited to push its community-driven partnerships, such as the Coalition Against Poverty in Suffolk, the Boys and Girls Club and the ForKids organization. The 200 to 250 worshipers each Sunday include regular volunteers for the Salvation Army soup kitchen and other causes.

He’s also excited for international work through Friends of Barnabas Health Care for Children in Honduras.

“We’ll look at ways that maybe we can be more involved in international missions, but really I just want to be able to serve the community,” he said. “I want us to be a place of grace and forgiveness and inclusion.”

As he spoke, children in the church’s daycare program could be heard laughing and playing in the playground outside and in the lobby. He admitted that he’s also excited about helping younger kids.

“We have grandchildren, and it’s easy to enjoy that age group with how much fun they have and all of their energy and enthusiasm,” he said.

No injuries in vehicle fire