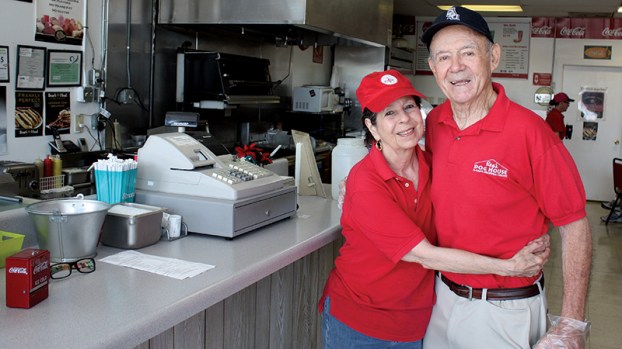 Ray and Cindy Carson are the owners of Ray's Dog House.

Ray’s Dog House is the kind of place that, when you find someone who has never been there, you feel compelled to rectify the situation immediately.

Such was the case on a Friday early in June, when Josh White found out his coworker, Mike Yow, had never had the pleasure of having a hot dog from Ray and Cindy Carson.

Soon, the pair had taken up residence at a table near the front of the shop, and Cindy was chatting with them before she had even taken their order.

“I do a lot of work, and when I’m around, I stop in,” White said. “I brought him to let him experience it.” 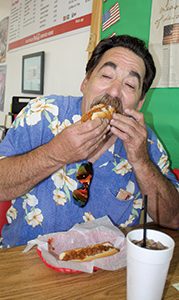 Mark Abraham is a regular customer at Ray’s Dog House. He enjoys his order with mustard, onions and chili.

Ray’s Dog House is just that — more of an experience than an actual restaurant. They might serve upwards of 170 hot dogs a day, but Ray’s is much more than just a place to get your fill.

“A friend of mine owned this shopping center,” Ray said of the . The friend offered the spot. The only question was what to put there.

Ray looked around and figured there weren’t many hot dog spots. The ones that did exist at the time were quite a ways away. “I decided that a good little hot dog place on this side would be good,” he said.

He set about opening his hot dog place, and of course, two other hot dog joints popped up nearby before he could open.

“I said, ‘What in the world have I gotten myself into?’” he recalled recently. But he forged ahead, confident that the venture would still allow him some leisure time.

The place opened on a Saturday in 1998 — they’ll celebrate their 20th anniversary this year — and it’s been nonstop ever since.
“There was a line out the door,” Ray said.

Ray’s serves a variety of ways to get your dog on. There’s Coney Island, pork and beef, all beef, hot and sweet smoked sausage, bratwurst, footlongs and even quarter-pounders. Toppings include two different types of mustard, ketchup, onions, chili, relish, sauerkraut, cheese or slaw. And, of course, they couldn’t get away without putting Texas Pete on each table.

There’s also subs, sandwiches and local favorites like the “square dog,” a Smithfield melt, Ray’s Club and Troy’s Club. Suffice it to say that each of those clubs has three different kinds of meat, and the restaurant prides itself on serving all Boar’s Head products.
Buns and hot dogs come out of the steamer before being warmed on the grill and embellished with fresh toppings prepared that morning. French fries or chips are available on the side, and a rotating selection of desserts allows folks to round out their meal with something sweet.

But the truly important part of Ray’s has nothing to do with the food.

“It’s a place where friends meet and greet each other,” said Cindy, who has been married to Ray going on 52 years. She’s also retired from education, most recently as a music teacher at Alliance Christian School.

“We’re really blessed, because they have become our friends,” Cindy said of the customers.

“We try to know each customer by name, and they get immediate attention when they come in,” he said. “We wanted a place where families could come and eat,” Ray adds, noting that they don’t serve alcohol.

Oftentimes, the personalized service comes from Ray or Cindy themselves.

“Cindy is a very warm-hearted person with tremendous personality,” Ray says lovingly. But he hints that he likes to talk, too: “A lot of times Cindy will get after me, because I’m talking instead of working.”

“We try to do things to support them,” Ray said. “We make contributions to Little League and people who need help.”

In addition to their customers, Ray and Cindy have a wonderful staff who make sure the restaurant runs smoothly, including Troy, Tammy, Patrick and Jack.

The place gets crazy at times, but the Carsons wouldn’t have it any other way.

Have baton, will conduct