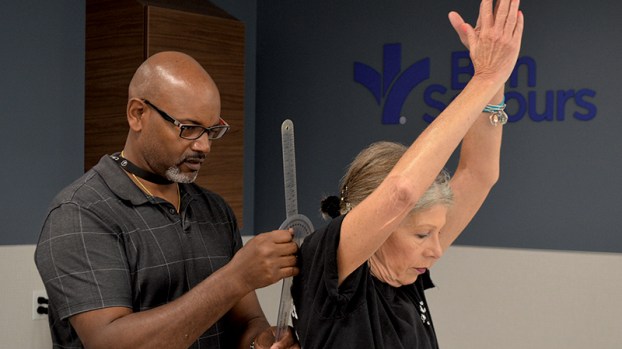 Sheila Fish faced a steep recovery after her March 5 surgery on her right shoulder. It was her second surgery in seven months to repair a complete tear of the rotator cuff, and she needed to get back to healthy.

She and her husband, Vernon Fish, had one request: they wanted Roland Butler Jr. to be her one and only physical therapist.

“It was the way he evaluated me,” Fish said about Butler. “He was compassionate and caring right from the evaluation, and you can tell that he’s got knowledge for rotator cuffs.”

Butler is the clinical director for Bon Secours InMotion Physical Therapy at the Taylor Road facility that opened in January. He will reach 12 years with Bon Secours this July after serving in the Air Force and retiring as a master sergeant.

Football, basketball and softball helped keep him fit during his military service but also led to an injury that required a knee replacement. It was during his rehabilitation that he got his first appreciation for physical therapy.

“I decided that I would go back to school after I returned,” he said.

The father of three has lived in the Chesapeake Square area with his wife, Isabel Butler, since 2008. The new InMotion Physical Therapy has 7,000 square feet of space on Taylor Road, more than triple what was available at the former Chesapeake Square facility.

Butler has the advantage of state-of-the-art equipment at the new facility, from a Keiser machine and leg press to low level laser therapy for chronic pain. He said the pristine look of the place helps build confidence in the 10 to 12 patients he and his staff treat daily, ranging from children up to age 95, he said.

“Sometimes they come in tense or nervous, especially if it’s their first time here, but we try to make them feel comfortable,” said Rehab Technician Arrington Gavin.

It helps that patients respond well to Butler’s detailed-oriented coaching on everything from pain management to range-of-motion exercises.

“Roland is a perfectionist when he gets his hands on a patient,” according to Rehab Technician Sharron Savage, who’s worked with him for more than a decade.

Each patient’s rehabilitation is tailored to the injury and is as fast or slow as the patient requires. A lot of it is convincing the patient to keep up with the rehabilitation outside of the sessions, and Butler manages that by showing them how each stretch, step and lift leads to progress.

“You can’t force them to do anything they don’t want to do, but you can guide them in the right direction,” he said.

According to doctor’s orders, Fish started her physical therapy the day after her surgery and has spent at least two hours each week with Roland. She was impressed by how he’s helped her manage pain with tricks like kinesio tape.

“I used a full stretch property to help decrease the tension in the muscle around her deltoids,” he said.

“I was actually starting to sleep well for the first time in two years,” she said.

Roland was excited about her rehabilitation. It was a slow process at first, but she eventually grew in confidence despite the second surgery. He explained that repeat surgeries can sometimes make patients cynical about the possibilities of recovery.

He can relate to that, considering he’s had multiple knee surgeries himself.

“The Lord gave you what you had in the past so you can use it today,” he said. “I can relate to them in that way. I can say, ‘This is what I felt when I did my therapy.’”

Fish has been a believer of Roland’s since Day 1 and has kept up with her rehab routines at home. She got even more good news on May 17 when Roland confirmed how much her range of motion for her right arm has improved.

“You did it,” Roland told Fish.

Fish immediately corrected him: “You mean we did it.”

Ray’s Dog House is the kind of place that, when you find someone who has never been there, you feel... read more