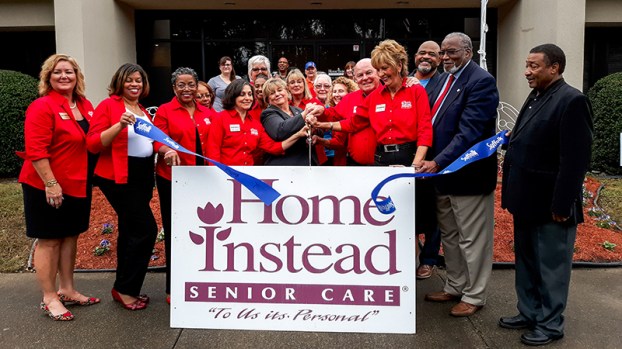 Home Instead Senior Care recently opened a new administrative office with much celebration.

Dozens of people attended the ribbon-cutting ceremony on Nov. 2 at the new office at 2000 Hillpoint Boulevard N. The office moved from a location on Pruden Boulevard, and several people at the ceremony remarked on how much safer it is to get to and from.

The franchise is owned by Larry and Nell Neal, who gave praise to God for the success of their business.

“We’re going to give the Lord all the praise and all the glory,” Larry Neal said.

Nell Neal echoed the sentiment and also sang the praises of the company’s caregivers.

“We’re so grateful, because we know we’re here today because of the Lord, No. 1, and No. 2 because He’s sent us fabulous people,” she said.

“Seniors in our community deserve the best,” said Nell Neal, who mentioned her mother has been living with her and her husband for eight years and is cared for by Home Instead caregivers. “I know firsthand the difference that our service makes in the lives of families.”

Mayor Linda T. Johnson also was able to speak from firsthand experience at the ceremony. As is typical for the mayor at ribbon-cuttings, she thanked the business for growing and keeping the business in Suffolk. But she also spoke from the heart.

Home Instead has been caring for her mother, now 96, for about the past eight years, Johnson said.