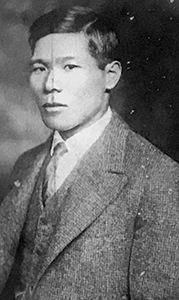 On the morning of Dec. 7, 1941, more than 300 Imperial Japanese aircraft attacked the United States naval base Pearl Harbor in Hawaii.

The Battle of Pearl Harbor would end up killing or injuring more than 3,500 U.S. sailors, Marines, soldiers and civilians. It was also the day that more than 100,000 Japanese-Americans living in the U.S. would be taken from their families and lives.

That’s what happened to Tsuruju Miyazaki, who owned the original Horseshoe Café in Suffolk.

Miyazaki was arrested shortly after the attack on Pearl Harbor, taken away from a family he would never again see with his own eyes. Leathia Boone, a black Suffolk native, and their two children, Gerald and Raymond, were left in shambles.

“They went from being pretty well off to nothing,” said Regina Boone, Raymond Boone’s daughter.

Boone has been on a journey of discovery into both her family and U.S. history that has taken her across the country and even the world.

She first learned about her ancestry when she was 13 and got her first glimpse of her grandfather a decade later in an old photograph.

Her father, Raymond H. Boone, was a Suffolk native, former Suffolk News-Herald journalist and the founder and publisher of the Richmond Free Press. When he was dying from pancreatic cancer in 2014, Boone asked his daughter to find out what she could about the man who raised him until he was stripped away.

“He basically passed this baton to me to find out what happened to his dad,” Boone said.

Boone has spent the last several years combing through records and archives. She is a staff photojournalist at Richmond Free Press, after spending nearly 14 years at Detroit Free Press in Michigan.

She also a Knight Wallace Fellowship recipient. This award is given to accomplished journalists at the University of Michigan, in which each fellow pursues an independent study plan. They also receive stipends to fund their pursuits.

Boone has been searching for clues everywhere with support from that fellowship, ranging from the Library of Congress to old editions of the Suffolk News-Herald.

“I’ve just been piecing everything together, and it’s like I’m collecting bread crumbs,” she said. “It’s slow, but it’s very personal.”

This is what she knows so far. Miyazaki was born in 1897 and immigrated to Suffolk at age 25, where he started a family as well as a few successful restaurants. Locals gave him nicknames like Mike and Zak, she said.

The stories surrounding the original Horseshoe Café and its successor are muddled. According to southernfoodways.org, Perry Jane Davis Lambert purchased the Horseshoe Café from Raymond Boone in 1945.

But Raymond would have been just 7 years old at the time, and there was no mention of a sale in correspondence that Boone found in the National Archive between her grandparents, she said.

Emails to a media contact listed on southernfoodways.org did not get a response. Lambert’s son, John Davis, said in a phone interview that his mother owned and operate the café until she died in 1999. He was about 5 years old when she first opened this café, and all his life, he heard the story about her purchasing it from Raymond Boone.

“I believe that’s what it was,” Davis said, reinforced by cousins who tell the same story. “That’s what (my cousins) know.”

This is partly why it’s been so difficult for Boone to find definitive details from when her grandfather owned the restaurant. All she knows is that the café reopened at a separate spot on East Washington Street, and according to her grandparents’ correspondence, somebody had taken the original sign from her grandfather’s restaurant.

“People get confused. History gets confused,” she said.

But she knows that her grandfather’s recipe for yock — a noodle-based dish — was a favorite for many of his former customers. Miyazaki was well-liked, lived above his restaurant and drove a Ford Coupe, until he was relocated by the government.

According to Boone, Miyazaki was one of two Japanese-Americans arrested in Suffolk — the other was one of his employees at the café. Another 14 were arrested in Norfolk. But “internment” is not the word Boone would use.

“That was the way for the American government to soften what was actually happening,” Boone said about the description “internment camp.” “What actually happened was they were imprisoned.”

Miyazaki was transferred to the Fort Howard detention center in Maryland and in 1942 was sent to Rohwer, Ark., along with approximately 8,000 other people. He later moved to Chicago in 1943 as part of the early relocation efforts by the War Relocation Authority.

Various difficulties prevented him from returning to Suffolk after his release. But he never forgot his family back home, Boone said.

“I know he was a family man, that he loved my grandmother, my father and (my father’s) brother,” Boone said. Miyazaki would write letters from the “incarceration camp” — as Boone called it — asking about his boys, how they were doing and sending money.

Miyazaki would spend the last three years of his life torn from his family in Chicago, and it was there that Boone traveled to find answers. It was in the Windy City that she found some kindness at the end of her grandfather’s life.

According to Boone, a burial service was held for Miyazaki at Midwest Buddhist Temple in Chicago. She discovered diary entries by a Buddhist priest at the temple that referred to her grandfather.

A Japanese film crew traveled with Boone to Chicago, chronicling her search for answers. She later traveled to Japan, where a story aired in Japanese media about her search, asking for viewers to call in if they had any information about her grandfather.

Someone called, and Regina met the caller in a town within the southern Nagasaki Prefecture. She met Sumie, 91, and Yurie, 86, who spoke of an uncle named Tsuruju who traveled to the United States a long time ago.

Then they led her to the family altar in the house.

“”When I saw the news on TV, I thought the man looked just like our uncle,” Sumie told the film crew. She showed Boone the photo they kept of him.

It was the same photo of her grandfather that was given to her by her father.

“We didn’t know Tsuruju-san had any children or grandchildren. We are all very surprised. I am so happy I lived this long,” Sumie told the film crew. “Our uncle is finally able to meet you. He must be so happy.”

Boone’s research remains ongoing as she works on a book about her journey and seeks answers from anyone in Suffolk that knew Miyazaki. People that may have photos, menus from his restaurant or just memories to share are welcomed to contact her.

“I’m following the orders of my dad and piecing together not only family history, but American history, and showing that this not only affected the Japanese and Japanese-American community. It affected a black family,” Boone said.

She couldn’t help but see the parallels in immigrant children currently separated from their mothers and fathers at the Mexican-American border.

“They say this could never happen again, but never again is right now,” she said.

Those that have anything they wish to share can email rboone08@gmail.com.

The driver fled and a passenger was hurt in a single-vehicle accident on North Main Street Wednesday evening. The crash... read more