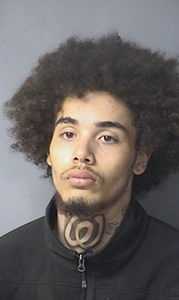 A man wanted on multiple charges in area jurisdictions was captured in Norfolk on Wednesday afternoon, after approximately 48 hours on the Hampton Roads Most Wanted list.

Yasir Malik Smith, 20, was captured about 1 p.m. at a residence in the 7700 block of Doris Drive in Norfolk, according to a press release from the U.S. Marshals Service. The arrest happened without incident, the release noted.

Smith was wanted in Suffolk on charges involving a shooting at a Suffolk couple as they returned to their home on Bennetts Meadow Lane in the early morning hours of Dec. 8.

He’s also wanted in Norfolk and Chesapeake on narcotics charges.

On Monday, Smith eluded police during a pursuit in Norfolk, the U.S. Marshals alleged. That’s when they added him to the Hampton Roads Most wanted list.

“Tips from the public generated by extensive media coverage provided investigators with several tips that aided in the investigation,” Wednesday’s press release stated.

Smith will be held at the Norfolk City Jail.

Suffolk residents can learn to be more effective citizens — safer against crime, and with a better grasp on how... read more