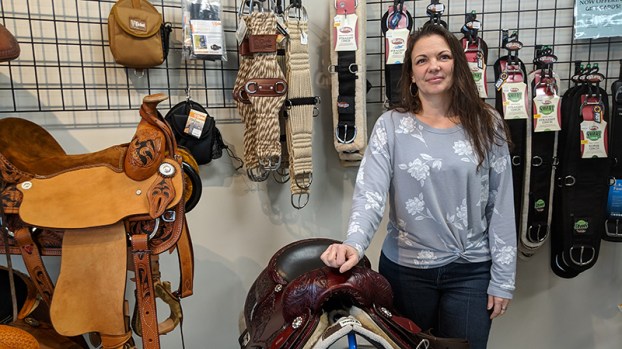 Cypress Saddlery store manager Dawn Raiford, standing next to Western saddles, said the store sells a wide variety of items for the horse enthusiast. The store has been open for six months and is at 1413 N. Main St. in the Suffolk Shopping Center.

Horse enthusiasts have home for needs

As a horse owner, Angela Ellis was tired of spending Saturdays driving all around the Peninsula and Southside Hampton Roads to find tack supplies.

With that in mind, Ellis opened Cypress Saddlery at 1413 N. Main St. in the Suffolk Shopping Center six months ago.

“Personal experience was my own inspiration to do it,” Ellis said. “I spent entire days in which I could have spent riding driving around Hampton Roads looking for stuff.”

The store’s clean, open layout welcomes the horse enthusiast with such things as apparel, boots, supplements, bits, trailer supplies and more. The store also has a consignment section. Ellis said if the store doesn’t have it, it can special order an item.

“We wanted to provide a place for horse owners,” Ellis said. “When they’re looking for something for their horses, they like to touch it. It’s one thing to order online, but most people want to touch it first.”

With its Roping Basics clinic on March 23, the store is working to expand its outreach and become better known to the horse community in Suffolk, and in areas such as South Hampton Roads, northeastern North Carolina, as well as in Isle of Wight and Southampton counties. She hopes to add some in-store question-and-answer sessions over the next few months.

She said with roughly 30 horse farms within a five-mile radius of her home off Carolina Road, there’s a need for a store like hers.

“The big reason why I wanted to open it in Suffolk is because it’s horse country out here,” Ellis said. “We didn’t have the selection we needed in the area.”

“We’re just trying to be a resource,” Ellis said. “It’s not all about the money for me. I like other horse people and hanging out with them. Just hang out with us. We’re OK with that.”