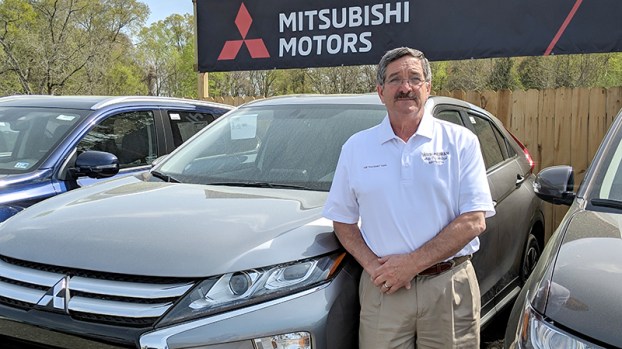 Mike Duman’s Auto Superstore is now selling Mitsubishi vehicles following an agreement between it and the global auto company. Duman said this gives him the opportunity to offer people a reliable import with strong warranties.

Mike Duman Auto Superstore is now a part of the Mitsubishi dealer network.

The dealership began selling Mitsubishi vehicles Jan. 17, and over the course of the next few months, will be undergoing image renovations.

“It gives us the opportunity to offer a reliable import product with one of the best warranties on the market,” said dealership owner Mike Duman.

Duman, who has been operating in Suffolk since 1980, cited Mitsubishi as the fastest-growing Asian vehicle brand in the United States for the second consecutive year. He had been selling Suzuki vehicles until 2012, and his dealership still services them.

But it was because of his relationship with former Suzuki employees that the deal with Mitsubishi came about.

“When they contacted me, Suffolk was not an area that national headquarters had planned on putting a dealership,” Duman said. “So those representatives had to sell the idea to (Mitsubishi) corporate executives in California that Suffolk would be a viable market to place the franchise.”

Duman provided Mitsubishi with growth statistics and market information, and he said they considered his longevity in Suffolk. He said 60 to 65 percent of his business comes from repeat customers.

“I analyzed the investment cost and potential and came to the conclusion that Mitsubishi is a strong global company,” Duman said.

Duman said with Mitsubishi having global partners in Nissan and Renault, he doesn’t expect it to go away soon, and he likes that the company is dealer-oriented and that it offers a five-year, 60,000-mile bumper-to-bumper warranty and a 10-year, 100,000-mile powertrain warranty on its vehicles.

“I would have never taken this on unless I had the facility, the ability to operate here in the city of Suffolk, and if I did not have the competent, dedicated staff that I already had in place,” Duman said. “So that made it immeasurably easier to make this decision.”

Mitsubishi said it is pleased to expand its presence into Suffolk.

Duman said more Mitsubishi parts are on the way, and a few of his auto technicians will be undergoing extra training on Mitsubishi vehicles.

“I did not need to hire a single person,” Duman said. “We already had the service and sales and management team, everything in place so we could immediately start providing the service that we needed to do, which was another, I’m sure, big factor in Mitsubishi’s decision to award us the franchise (since) we could be up and running virtually overnight once we received inventory, parts and service equipment.”

Duman said that in the almost 39 years he’s operated in Suffolk, the new agreement with Mitsubishi will be another chapter in the dealership’s history. He said he has been pleased with sales in February and March, especially with limited advertising of Mitsubishi vehicles that only began earlier this month.

“Our goal is to continue to do what we’ve always done, and that’s support Suffolk and the local community the best we can in servicing and supplying their transportation needs,” Duman said.

Jackie Scott of the Hardee’s at 2301 Pruden Blvd. recently won the Founders Award, which is the top award given... read more