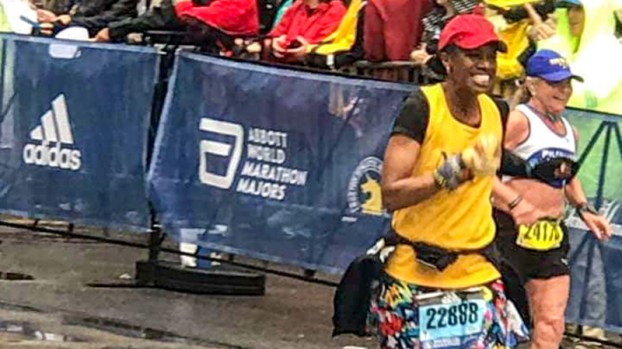 Suffolk resident Lisa Davis treks forward in the Boston Marathon on Monday. It was her 178th race of marathon distance or longer. (submitted photo)

Suffolk resident Lisa Davis had run 177 marathons or ultra-marathons prior to this week.

She has completed the goal of running a marathon in every U.S. state, and she even did one on the Great Wall of China.

Her running has even landed her in the record books. She holds the Guinness World Record for the fastest time for a woman to complete a marathon on each of the seven continents — seven days, 30 minutes and 27 seconds — which she accomplished in January 2017.

But Monday’s Boston Marathon — her 178th marathon or ultra-marathon but her first appearance in the acclaimed race — was perhaps one of the most meaningful for her.

“It’s the oldest and most prestigious marathon,” said Davis. “I’ve done a lot of races, and I’ve done some big races. But there’s something about Boston that I can’t even explain.”

Davis said she was inspired by all the people cheering on runners and handing out water, fruit and other nutrition, not only at the official aid stations but also in front of their own houses. It’s a common occurrence along marathon routes but felt different in Boston, she said.

“You really feel like they want you there,” Davis said. “They help you along the course all along the way.”

Davis said she was also inspired by the history behind the event, from its beginnings in 1897 — making it the world’s oldest annual marathon — to the tragic outing in 2013, when a terrorist bombing near the finish line killed three spectators and injured 264 people.

“When they say Boston Strong, they mean it,” Davis said, referring to the hashtag that took hold on social media following the bombing. She spent several miles of Monday’s race chatting with another runner who was at the 2013 event.

“This race is so special; this city is special,” she said. “The feel of it is just amazing. It is a feeling more than anything you can really put in words.”

“It was tough, because my morning started out kind of squirrelly,” she said, noting some trouble traveling to the start line. “I was soaking wet by the start of the run, and it was cold early on. But it proved to be OK after about mile 2, because then the sun came out.”

Davis, who likes to have fun while she runs, took some dancing breaks, too.

“Once you get there, you’ve got to run in the moment,” she said. “I might not get another one. I hope I do, but if I don’t, I would have missed my opportunity to enjoy the one I did get to go to.”

This race was also special for Davis because her friend and coach, Beofra Butler, completed her 100th marathon at Boston. Butler had been there to support Davis when she ran her 100th, the Newport News One City Marathon, in 2016, even though Butler had run a marathon in Washington, D.C., the day before. At Boston, Davis got to return the favor.

She also got to run with her cousin, C.R. Qualls.

“I got to run with some significant people in my life,” Davis said.

She turned 50 this year, so she has been focusing on races with “50” distances — 50Ks and 50-milers. In March, she completed a 50K and 50-miler on back-to-back days. Also last month, she did a Selma-to-Montgomery run in Alabama to commemorate the 1965 march led by the Rev. Dr. Martin Luther King Jr. She turned in the winning time for individual runners.

But Boston still holds a special place in her heart.

“I look forward to returning to Boston as many times as humanly possible,” she said. “It was a great thing to do my 50th birthday year.”

Ticket worth $50K about to expire

Check your wallet, the bottom of your purse and that stack of papers on the coffee table. Someone, perhaps a... read more