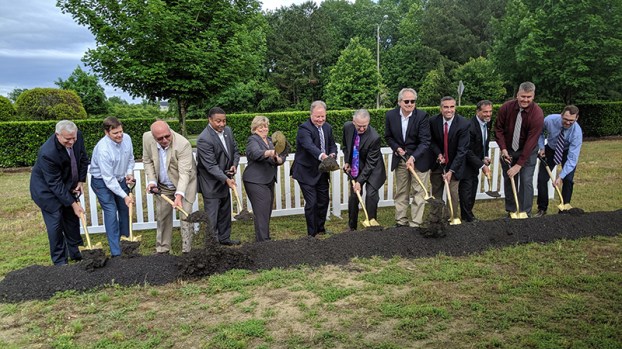 The Lakeview Medical Center at Harbour View, in a joint venture between Bayview Physicians Group and Sports Medicine and Orthopedic Center, broke ground Tuesday on a $14 million, 42,000-square-foot medical office building and ambulatory surgery center slated to open next summer.

Jim Hartz, president and chief executive officer of Bayview Physicians Group, said it would be open in 12 to 14 months, and once it does, the facility will be at full capacity and be one of the premier buildings in the area. Lakeview Medical Center, which has served Suffolk since 1906, joined Bayview Physicians in 2013.

“Now we’ve got the tenants — the surgery center, the orthopedic group and then all our practices from Lakeview and Bayview,” Hartz said.

Dr. Bryan Fox, the physician representative for Sports Medicine and Orthopedic Center, said, “as Suffolk grows, the two of us plan to grow with you.”

The facility has already been two-and-a-half years in the making, with Hartz noting the growth of its Bridge Road practice. He said they wanted to be close to U.S. Route 17 and to the Harbour View entrance, and the site at 5801 Harbour View Blvd. next to the Montessori Academy of Virginia—Suffolk, gives them what they want.

“This site wasn’t (initially) available,” Hartz said. “Everything was back toward the end of Harbour View Boulevard, which is down by the interstate. … We wanted to be up here close to the traffic and where people lived. And we knew 17 was going to be developed with new people and new patients.”

The three-story building will be nearly identical to its facility off of First Colonial Road in Virginia Beach that was built 10 years ago.

Hartz said the new facility will give North Suffolk residents an affordable option for medical care.

“Because we’re not hospital affiliated, we have a lower cost structure for our patients,” Hartz said. “They have less out-of-pocket expense.”

Fox said the market in health care is moving toward the model opening in Harbour View.

“Developing a center here, we’ll have quality medical care, not only through the 15 orthopedic and intervention spine specialists in my practice, but the 100 physicians with Bayview (Physicians) Group, bringing a multi-specialty group together under one roof,” Fox said. “Combined with the ambulatory center, it’s going to be the centerpiece of this area, I think.”

Lucille’s to close up shop

After 45 years in business, Lucille’s will be closing up shop this summer. Lucille Judkins started the downtown alterations shop... read more