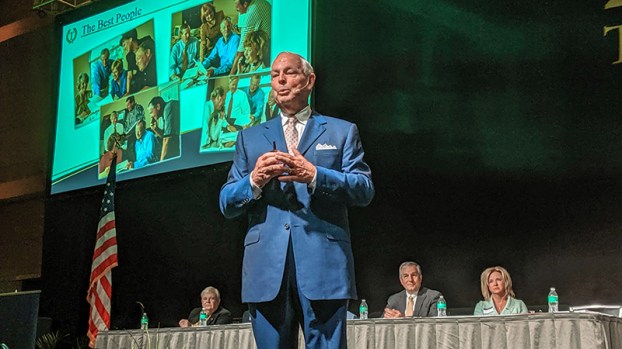 TowneBank officials touted its accomplishments over the past 20 years and outlined future plans during its annual shareholder meeting Wednesday at the Virginia Beach Convention Center.

Suffolk has a strong foothold in those accomplishments and future plans, with a corporate campus and bank branch in North Suffolk and growth expected in the city and points west.

Following his speech, G. Robert Aston Jr. recalled his Suffolk roots, noting his family had a farm near Buckhorn.

Aston, TowneBank executive chairman of the board, lived on the farm when he was young and then moved into the city around the age of 7, living on Cedar Street and played multiple sports. He went to George Mason School, Thomas Jefferson Elementary School and Suffolk High School — none of which now exists as a school — and eventually graduated from Cradock High School in Portsmouth.

“Suffolk was a great place to grow up,” Aston said. “If I had a mental picture of that, it would be those Norman Rockwell paintings from the ‘50s that, everything was good. The whole city was your playground. You could get on your bike and go anywhere.”

Aston has maintained his ties to the city, as he is the chairman of the board at Nansemond-Suffolk Academy, where his daughter, Kim Aston, heads the Upper School.

Among the bank’s accomplishments is its 19th straight year of record earnings at $133.5 million, and increased asset growth, with $11.2 billion in 2018, up from $8.5 billion the previous year. The bank was also recently named for the first time as one of Forbes Magazine’s best banks for 2019. Aston said TowneBank is in a strong capital position.

There is a lot of pride in the accomplishments, which Aston said derives from the quality of the people who work for the bank and the partnership it has with its shareholders.

“Our shareholder base, they come from all walks of life,” Aston said. “From $1,000 investments to couple of hundred thousand dollar investments, I think what’s made us what we are is that we have had that strong community support. And it’s continued.”

Suffolk also has a part in one of TowneBank’s target markets — the Richmond metro area — with the building of a new branch at Iron Bridge in Chesterfield County. Students at NSA collaborated with TowneBank and architectural firm HBA Architecture and Interior Design to create three-dimensional models of a bank that will soon go up in the Richmond suburbs.

Richmond, as well as the North Carolina regions of Charlotte, Greenville, the Research Triangle area of Raleigh-Durham and the Triad area surrounding Greensboro, are areas the company has targeted for growth.

TowneBank Chief Executive Officer J. Morgan Davis said during the meeting some keys going forward would be revenue growth, expanding its branch banking network, “relentless development of technology” to make its services easier to access, recruiting and developing talent and branding in its North Carolina markets.

But Aston said the bank will not forget its roots in the midst of its growth — about half of which came from Richmond and North Carolina — as it has a 23-percent market share in Hampton Roads. He noted most new banks break even in three years, while TowneBank did so in six months, and was “built on friendships and relationships.”

Aston said he expects Suffolk and areas west of the city to thrive in the future.

“I think Suffolk, when you look at the future, I think the areas west of the region are going to be where the growth’s going to be because that’s where the land is,” Aston said, “and so I think Suffolk’s future is really ahead of it. Hard to say what it might look like 20 years from now, but I think it’s very positive for the city.”

‘Come grow with us’

Before a packed ballroom at the Hilton Garden Inn Suffolk Riverfront Tuesday for her State of the City address, Mayor... read more