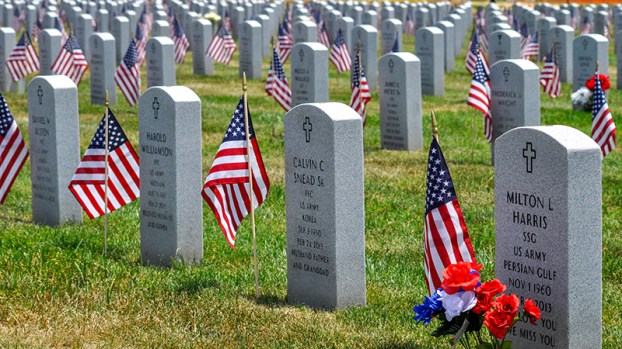 Col. Dale E. Hruby urged those in attendance to stroll among the graves, read the names, and salute the individual heroes. (Jen Jaqua photo)

Audrey Page and her 12-year-old daughter Diara were emotional as they came to the Albert G. Horton Jr. Memorial Veterans Cemetery for Monday’s Memorial Day ceremony.

They came to remember Dwayne Page, who died earlier this year. He served with Audrey Page and is her ex-husband. For Diara, he was her father.

Audrey Page, who came to the United States from St. Vincent and the Grenadines and joined the U.S. Navy in 1985, met Dwayne while they served together. She wanted to remember him, as well as all those who served and did not come home.

“It was an honor to stand and represent those who served before me, because they paved the path for me to be there,” said Audrey Page, who served in the U.S. Navy until 2005, “and being someone who’s from another culture, another place, another country, it was good to serve the United States of America.”

American Legion Nansemond Post 88 co-hosted the ceremony with the Virginia Department of Veterans Services’ cemetery as more than 200 people came out to pay their respects and remember those who paid the ultimate price in service to their country.

“These numbers are cold, impersonal statistics,” Hruby said. “The point I want to make about these numbers is each one represents a patriot, a son or daughter of this nation.”

Hruby said for him, Memorial Day is about the individual pals they lost, such as soldiers who they placed on medevac helicopters and later learned they didn’t make it, or those at Veterans Administration hospitals or people with post-traumatic stress disorder who were not able to recover.

“I urge you to stroll among the graves, read the names, and salute the individual heroes,” Hruby said.

He noted that with “more than half of all those we commemorate on this day were draftees,” it was time for them to be properly recognized. They were not professionals, but rather, citizen soldiers, airmen, sailors, Marines and Coast Guardsmen. From the Civil War through the 1970s, “the U.S. was largely manned with young men who responded responsibly to the Selective Service system.”

He said these men didn’t burn their draft cards, but instead stood in line for their military I.D.’s and dog tags. They didn’t flee to Canada or seek deferments, and they served in areas they may not have wanted to, he said, and many of them died doing so. but they did those things out of a sense of duty.

“Did they ever complain … about these things? They certainly did,” Hruby said as the crowd chuckled. “They were young Americans and they did their share of complaining. But it was honest complaining … that resulted in change and improvement. They knew where to draw the line because, like all the regulars, they were dedicated to the team mission.”

Most draftees did not protest, but rather served with distinction, returning home and going to college, picking up their lives and continuing to do their duty for God and country while mourning the losses of their friends and buddies who did not return home.

He asked those in attendance to pay tribute to all who served, but to say a special prayer for those draftees who did not return home from their service. Still, he wanted to make the point that it is OK for people to celebrate the day with cookouts among family and friends.

“There’s nothing wrong with wishing someone a Happy Memorial Day,” Hruby said. “Those honored dead gave their lives so that we could live our lives in freedom and our way of life. And an essential part of that way of life is to celebrate with our families and friends.

“I believe that they would appreciate and accept our salutes and remembrances. But they would also want us to kick back and enjoy a barbecue, have a beer and a good ol’ American three-day weekend.”

With humility, humor and a hunger to make a difference, some of the 68 members of Nansemond-Suffolk Academy’s class of... read more