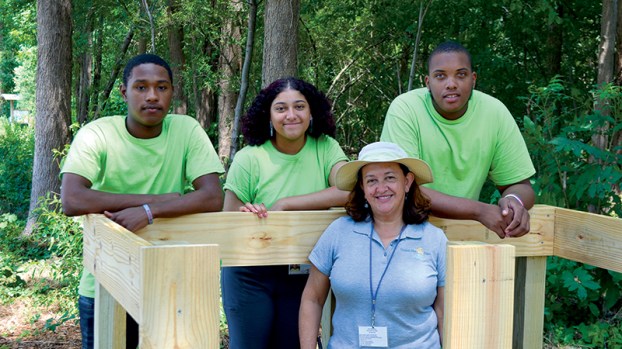 Paradise for learning and enjoying nature

Western Branch residents only need to take a short drive to enjoy Paradise Creek Nature Park in Portsmouth, where a new playground has been added to help foster young environmental stewards.

Portsmouth also welcomed its greenest playground at an Earth Day celebration on April 27 this year, when the ribbon was cut for the TowneBank River Playground at Paradise Creek Nature Park. The playground features musical instruments, climbing structures, a wooden ship, an outdoor learning classroom and a Little Free Library.

According to Mark Palamarchuck, director of Portsmouth’s Department of Parks, Recreation & Tourism, said most of the materials used were plastic or unfinished locust wood.

Stumps from trees that were removed from the playground site are now seats in the outdoor learning classroom. Norfolk-based artist Peter Geiger produced artwork for the playground, including murals that show the ecology and history of the Elizabeth River.

The park was handed over to the city of Portsmouth with the playground’s completion, according to Mayfield Jackson, who emphasized how the park allows for “untold amounts” of volunteer and education opportunities for young people.

Children today live in “concrete jungles” and are glued to their devices, she said, and studies have shown that being in the outdoors helps improve their concentration and overall mental health.

“It gives children a love of nature from a very young age, which is key to becoming lifelong stewards of the environment,” she said.

The Elizabeth River Project plans to further expand its education and recreational programs at Paradise Creek. Earlier this spring, for instance, 500 pre-kindergarten students came to the park for a Junior Ornithology field trip. According to Yolima Carr, conservation landscape curator for the Elizabeth River Project, the students learned to identify common birds at the park, including red-winged black birds, American robins and great blue herons.

They also were given blueberry plants to grow in their classrooms.

“Teachers explained that many birds eat berries such as blueberries and that they would help the birds at Paradise Creek Nature Park by growing the plants and planting them during their spring field trip,” Carr wrote in an email.

Youth conservation interns from Portsmouth Public Schools and through the NextGen Regional Internship Program are planting and assisting Carr with various other projects at the park this summer. They’re planting different native species, removing invasive ones and building a compost box.

It’s not easy work in the heat and humidity this summer, but it’s also “therapeutic” to see the fruits of their labor, said Hailey Wilson, a 17-year-old rising senior at Woodrow Wilson High School.

“We can make a big impact on the world, and it starts small — with just one plant,” Hailey said. “It can go a long way if you help it grow.”