Kicks Laundry cleaning up on sneakers 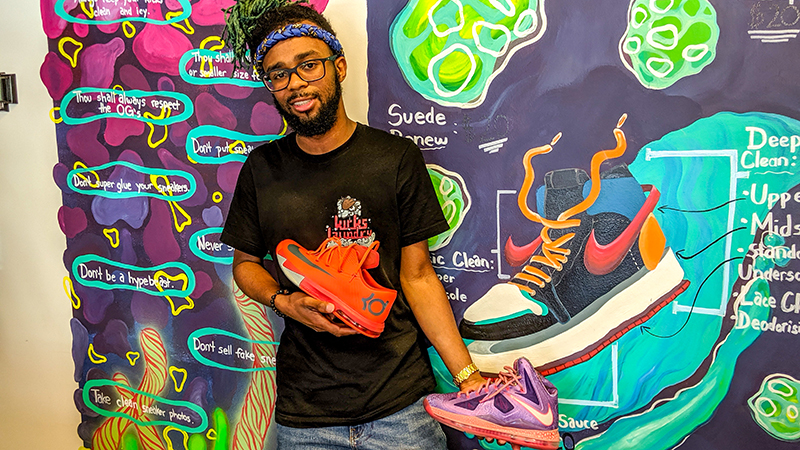 Daequan Boone has been cleaning sneakers since he was a student at King’s Fork High School.

So it’s a natural evolution to owning his own sneaker cleaning business, Kicks Laundry, at 129 W. Washington St. The shop opened Aug. 17.

“I started cleaning sneakers when I was in high school, where everybody else was bringing in their shoes,” Boone said. “Every shoe would cost between $100 to $300, and once that person’s shoes get dirty, they don’t want to wear it any more. So they needed somebody to actually clean the sneakers instead of always going for the dress shoes.”

Still, Boone learned how to clean dress shoes and purses along with the sneakers.

“I decided to bring the sneaker culture and the skate culture and also bring local brands around Virginia together, so everybody wouldn’t have to go to Chesapeake or Norfolk or Virginia Beach all the time,” Boone said. “They have something right here.”

Kicks Laundry is a franchise, and it has stores in Tampa and Orlando, Fla., and another in Virginia Beach, though that store will eventually move to Norfolk, Boone said.

“I decided to bring it closer and add something different to the city,” Boone said. “I felt like it was that time to bring here.”

Boone said it was his father who would bring him shoes to clean when he was starting out, and it went from there.

“I actually got good at it,” Boone said. “And then I was like, ‘Hey, I actually like cleaning shoes.’”

He learned how to clean shoes initially by trial and error, cleaning his and his parents’ shoes, and then he learned in more detail from the Kicks Laundry founder.

“You have to honor where everything started, because without dress shoes and shoes in general, there wouldn’t be a form of sneakers,” Boone said.

In the store, he has a board that lists the 10 sneaker commandments, including the obvious one — “Never step on other people’s shoes.”

Boone said he can handle all types of men’s and women’s shoes, as well as purses and heel repairs. He said a basic cleaning can take as little as an hour, with full restorations taking anywhere from two weeks to about a month depending on how much work needs to go into it.

He said his connection with shoes has allowed him to meet people of different generations and walks of life. His business fuses art, fashion and sport to form the soul of the sneaker culture, and Boone is excited to be in downtown, in his hometown.

“This is the perfect spot for me to be in, with everybody driving by, big window front,” Boone said. “This is the main, busiest area, right near the courthouse.”