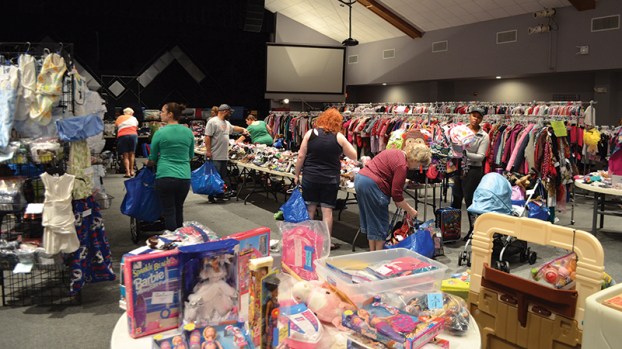 The semiannual Consign 4 Good sale in the Western Branch area allows local parents to get toys, clothes and more at bargain prices while helping each other and local charities.

Longtime shoppers and newfound fans of “Consign 4 Good” perused tens of thousands of used, well-kept items for infants to young adults in a spacious room at Plan Bee Academy in Western Branch.

The selection runs the gamut of toys, clothes, books, electronics and more. There are children’s boots and Spiderman shoes, Mickey Mouse toys and Lego sets, plus clothes for teens and young adults.

The September sale at Plan Bee Academy even featured antique replica pedal cars and a mechanical horse still in the box.
“We had a robotic dinosaur last year that sold for $200,” DiGeorge said. “It was an animatronic kind of thing.”

Western Branch resident Kristin Leverett was looking at the tiny footwear stacked and organized on a long table of shoes in all makes, colors and sizes. She wanted winter gear for her 9-month-old Kamille, along with a nice toy, ideally one with lights and music.

Kamille’s birthday is on Christmas, Leverett said, and she had to make sure it was a good present. Luckily for her, the Consign 4 Good selection was up to the task.

“It’s good quality stuff (and) good prices,” Leverett said, especially since children go through their toys and clothes so fast, she added.

Western Branch resident Ellen Johns was at the sale with her sister, Karen Kriebel, to look for clothes for her newborn grandson Caleb, just 1 month old. Johns found some for now and others he’ll grow into later.

It was the first Consign 4 Good sale for both Leverett and Johns, and both were nicely surprised by the quality and prices.
“The prices are generally better than other consignment stores, and the quality of things are really, really nice,” Johns said as she looked through the pickings for her grandson, plus some girl’s clothes for her other grandchild. “He has an older sister, Olivia, who is a year and a half, so of course we had to buy some things for her too.”

September marked the fourth spring and summer sale for Consign 4 Good at Plan Bee Academy, and the 11th year of Consign 4 Good all together, DiGeorge said. The sale’s first few years were held at the Crittenden, Eclipse & Hobson Ruritan Club in the Eclipse community of Suffolk, before DiGeorge relocated to Ebenezer United Methodist Church and then expanded to Western Branch, as well.

She started with a former partner under the name “Cradle and All” during the 2008 financial crisis, and DiGeorge said the name Consign 4 Good came from the four good reasons for the consignment sale in the first place.

Those reasons, according to DiGeorge, are that it helps people save money shopping, helps them earn money from what they invested in their kids’ items, helps the community reuse items and helps support a local charity, as a percentage of each sale’s profits goes to a pre-selected charity.

Consignors bring in their items the Tuesday before the Thursday-through-Saturday sale in September and organize them on the tables and racks. Volunteers screen all the items the next day to remove anything that’s stained, unsanitary or has been recalled.

Consignors earn 60 to 70 percent of sales, depending on how many hours they volunteer to help at the sale, bagging purchases and sorting items and so on.

“They don’t have to be here during the sale, but if they volunteer they’ll earn more money, so we have no trouble getting volunteers,” DiGeorge said.

Social media and word of mouth have spread the word on Consign 4 Good, and the Western Branch sale is reaching even more families in Chesapeake, DiGeorge said. The well-kept items are significantly cheaper than retail, and beyond that, parents can get some return on their time-limited investments.

“We call it renting your clothes, because what happens is that the shoppers eventually become consigners, as their kids get older and they’re ready to sell their stuff,” DiGeorge said.

Items can sometimes go through three or four families at Consign 4 Good. DiGeorge used one particular rolling basket as an example.

One of the consignors had bought the basket at the very first consignment sale, DiGeorge said. This person then sold it at a Consign 4 Good sale at Ebenezer United Methodist Church five years ago, and the person who bought it that year brought it to Plan Bee Academy in September.

“They brought it back, consigned it and sold it last night, so we had something from the very first sale get resold at this sale, 11 years later,” DiGeorge said. “I just think that’s awesome.”

Story by Phyllis Speidell Photos by John H. Sheally II For nature lovers — or anyone who yearns for some... read more