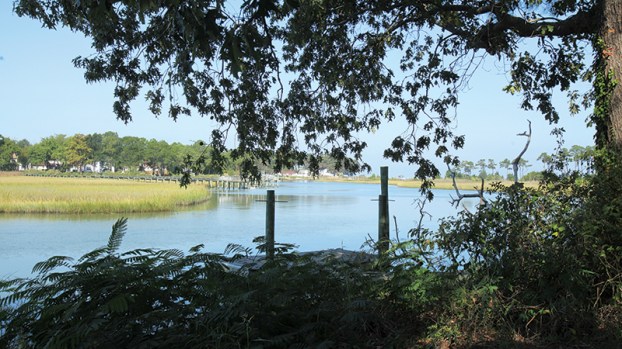 For nature lovers — or anyone who yearns for some scenic outdoor space — there is what many call “a little piece of heaven” sandwiched between suburban Churchland and busy Harbour View.

The Hoffler Creek Wildlife Preserve provides a refuge, 142 acres of tidal and non-tidal habitat, not only for a wide variety of birds and critters but also for people seeking a bit of tranquility and natural beauty laced with local history.

Hoffler Creek Wildlife Preserve bills itself as a grass-roots, non-profit wildlife preserve where learning comes naturally and wonders never cease. Carved out of an area once destined to be sold to developers, the preserve includes Lake Ballard, a 30-acre former borrow pit, surrounded by tall trees filled with more than 200 bird species — from songbirds to red tailed hawks, egrets and ospreys. A few wooden lookout piers dot the shoreline, enabling visitors to watch fish, turtles and occasional otters. The piers are carefully constructed with slanted, wide railings so the small children won’t perch on them and topple over. Just in case a small daredevil does lose their footing, rescue flotation devices are on every pier.

The lake is surrounded by woods traced with five walking trails. Visitors report sharing the trails with animals like squirrels, raccoons, possums, fox and even a few deer.

First and foremost, Hoffler Creek remains a wildlife preserve and its few restrictions are aimed at protecting the wildlife and the habitat. Only small hand-carried boats, such as canoes and kayaks, are allowed on the lake. Bicycling, jogging, pets and smoking are all prohibited as possibly frightening or hazardous to the animals.

Visitors are welcomed, however, and can expect to find a picnic pavilion, an education center, special programs, marsh overlooks and portable toilets.

Ashley Orgain Morgan, a Western Branch High School alumna and the newly named executive director of the preserve, is familiar with its history. Fresh out of graduate school with degrees in resource management and environmental education, she first joined the preserve staff in 1999. She assisted the preserve founder and first executive director, Randi Strutton, in laying out trails and otherwise developing the preserve. From her early years at the preserve, she remembers the naked shoreline of the borrow pit and how the hundreds of tiny loblolly seedlings she helped plant grew rapidly into the dense woods around what is now the lake.

Morgan left the staff after 14 years but recently returned to what she calls her “dream job.” She soon realized, however, that, while still beautiful, the 20-year-old preserve is in need of a bit of spiffing up.

Morgan points out areas where the grounds need to be tidied and a few structures need repair. She is reaching out to community volunteers to join the staff on the second Saturday of every month to get the grounds back in shape.

Morgan believes the deep peace of the area must have appealed to early residents of the property. The creek that bounds the preserve is said to be named for a Revolutionary War militia captain, William Hoffler, who may have settled in the area. A family of truck farmers, the Ballards, settled there in the 1850s and named their farm “Floral Point.” For a century they sent their fresh produce, via barge and steam boat, to markets in Norfolk, Baltimore and beyond.

The Ballard home sat on a high point of land, surrounded by wildflowers. From there, the family could overlook the river where the Battle of Craney Island took place during the War of 1812 and where the Civil War ironclads, the Monitor and the Merrimack, dueled half a century later.

covered in periwinkles. The Ballards followed the tradition that the periwinkles warded off evil spirits.

Near a pier on the creek, heritage plants and mesh bags of oyster shells, rather than rip rap or bulkheading, protect a living shoreline. The oyster shells also provide a reef to encourage the return of active oyster beds like those that once flourished there. School children visit here for special programs on ecology and oyster restoration.

Morgan looks overhead to find some of the tall white cedars that remain from the rows of trees the Ballards planted along the north side of the roads that ran through their property.

Strutton was the driving force behind creation of the Hoffler Creek Wildlife preserve. In 1986, she moved from Cradock to a home with a backyard that opened to what is now the preserve. Less than 10 years later, she noticed pre-construction activity in the preserve, the last piece of undeveloped land around Hoffler Creek. The state was selling off excess land, leading Strutton to rally a team, organize a non-profit to fight what they saw as substandard development and lobby for support locally and in Richmond. When the land was finally deeded to the city of Portsmouth, the group was the only response to a request for proposals to manage the land. In 1997, after the group raised $104,000 and developed a master plan, the city granted them a five-year trial run. Today the city of Portsmouth still owns the property, and the Hoffler Creek Wildlife Foundation originated by Strutton still manages the preserve.

Thanks to Strutton, her team and community volunteers, visitors can enjoy the peace and beauty of the preserve, and the community benefits from the preserve’s balanced ecology.

On a recent morning, local residents Paulette Lamback and D.J. Alston strolled along the lakeside trail.

“We did this on the spur of the moment to get some exercise,” Alston said. “This is somewhere to clear our minds.”
Like a little piece of heaven.

Paradise for learning and enjoying nature

Western Branch residents only need to take a short drive to enjoy Paradise Creek Nature Park in Portsmouth, where a... read more