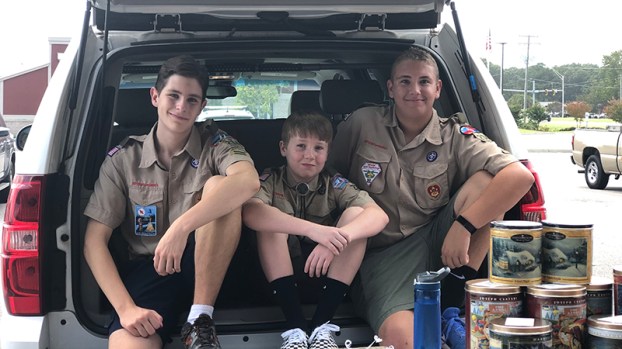 Pictured, from left, are Adam Russell, Brandon Bryant and Aaron Eure of Boy Scout Troop 234. The troop is based out of Covenant United Methodist Church on Dock Landing Road. (submitted photo)

Public service, one project at a time

Boy Scouts in Western Branch are consistently doing good, and doing it with enough enthusiasm to accomplish even more.
Tim Zemienieuski is a 15-year-old sophomore at Peninsula Catholic High School in Newport News and a member of Boy Scouts of America Troop 234 in Chesapeake. He’s also part of Blue Heron Lodge No. 349 in Virginia Beach, which is the Order of the Arrow Lodge for the Tidewater Council.

The Order of the Arrow, according to blueheronlodge.org, is Scouting’s National Honor Society. The organization provides service and leadership opportunities for older Scouts, with a dedication to “cheerful service.”

But what exactly is “cheerful service”?

For 13 years, Troop 234 has been been based out of Covenant United Methodist Church on Dock Landing Road. The young men of this troop strive to do volunteerism and community service of the highest caliber, and one way they accomplish that is through their many Eagle Scout projects.

Patrick Smith, a 17-year-old senior at Western Branch High School, of Troop 234 plans to help work on signage and benches at the Hoffler Creek Wildlife Preserve in Portsmouth. Patrick’s plan is to renovate park benches and to remake signs and maps on the trails, particularly those that need to be updated since new trails have been added.

“It will help people picture where they’re at and where to go,” he said.

Aaron is a member of Westminster, and his project will focus on landscaping around the entrance — weeding, mulching, planting new flowers and more. He said he wants his work to leave a good first impression on the people that visit the church.

“It’s going to leave them with a good first impression, and I just think it’s going to make the church look better,” he said.

The troop has also had a fruitful partnership with Covenant United Methodist Church, their host in Western Branch. They volunteer to help with the church’s barbecue fundraisers twice a year and perform regular cleanups of the church grounds.

It was Troop 234 Scout George DeBoer’s Eagle Scout project that gave the church its Prayer Walk through the nearby woods. Frank Jennings, former pastor of Covenant UMC for 18 years prior to current pastor Tommy Suh, recalled that initial project with pride.

He also looked back fondly on the subsequent Eagle Scout projects that further developed their Prayer Walk — Scouts installed posts for the stations of the cross, built a bridge and added railings to it, as well as a welcoming sign for the entranceway.

“One of the things I like is that they’re very organized,” Jennings said. “As a result, the boys involved with the troop — their parents can feel very comfortable that the boys coming up into the senior Scouting (positions) are going to be taken care of responsibly, (and) that they’re going to have activities, camping and different service projects that they do.”

Their service to the public in the Western Branch community and other nearby cities has helped them become better leaders, outstanding citizens and helpful members of the community. Their projects have also helped them realize the great things that they can accomplish themselves.

“There’s nothing better than to see a youth who says ‘I can’t do that,’ and then to see their face when they realize that they can,” said Mike Zemienieuski, Tim Zemienieuski’s father and a representative of the Tidewater Council.

His son, Tim, has been a member of Troop 234 since 2015. Tim finished his own Eagle Scout project in April, when he renovated a shed at Portsmouth Catholic Regional School.

Tim said knowing how to re-side a shed isn’t a typical skill for a 15-year-old, but once he figured it out, he was glad to do it.
“I felt really good, because that was the school that I went to when I was in elementary and middle school,” Tim said.

“Seeing that dilapidated shack that everybody drives by pretty much become a brand-new building was rewarding to me.
“It was very rewarding, and I was proud of myself for being able to accomplish that.”