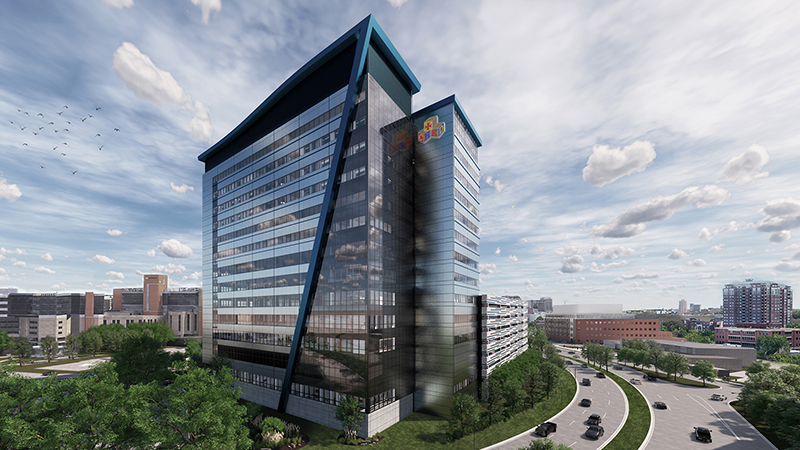 A rendering of the new Children’s Hospital of The King’s Daughters mental health hospital is shown. Langley Federal and the Langley for Families Foundation recently announced a $1 million investment over five years to support the new hospital. In recognition of its support, the inpatient family lounge in the new hospital will be named after Langley Federal Credit Union. (submitted image)

CHKD has commenced construction of the 14-story building on Hampton Boulevard in Norfolk that is scheduled to open in 2022.

In recognition of its support, the inpatient family lounge in the new hospital will be named after Langley Federal Credit Union.

Children are living with, and dying from, undiagnosed or untreated mental health conditions, and as Virginia’s only free-standing children’s hospital, CHKD is poised to make a difference. The new CHKD mental health hospital will provide:

“CHKD has led the field in addressing the mental health crisis for children in our community,” said Langley Federal Credit Union President and Chief Executive Officer Tom Ryan. “At Langley, we believe in their vision and recognize the positive impact this initiative can have on many of our community’s challenges.”

“We are building hope inside the walls of this new hospital, but it will take our entire community working together to change the future for our children,” said CHKD Chief Executive Officer and President Jim Dahling. “We are grateful to our loyal friends at Langley Federal Credit Union for their keen understanding of this issue and their early, pacesetting support of this important initiative.”

CHKD has developed, and continues to build, a coordinated team of clinicians across the fields of psychiatry, psychology and mental health outpatient therapy to treat patients with quality, evidence-based practices. The goal with the new mental health hospital is to prevent children from staying in the emergency room, sometimes for days, while waiting for a bed in a psychiatric center or from being sent to an out-of-state facility away from family.