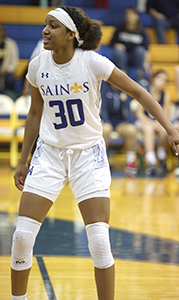 Alivia Giles was selected the TCIS Conference Player of the Year for the Lady Saints. Coach Kim Aston also was named Coach of the Year. (Jeffrey Dailey Photo)

The Lady Saints had a strong season this year. They went undefeated in conference play, earning the regular-season title outright. That gave NSA the top seed for the Tidewater Conference of Independent Schools tournament, and they went on to win that as well.

Cammy Reid joined Giles on the first team. Alyssa Waddy was a second-team selection for the Lady Saints.