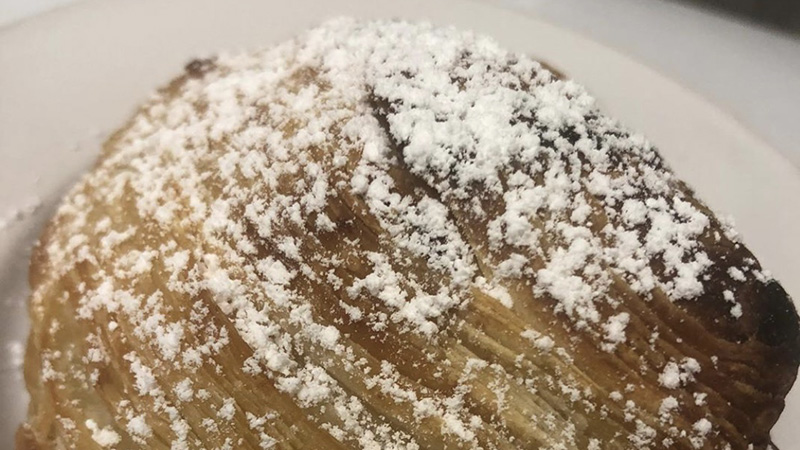 One of the new desserts at Napoli’e Italian Ristorante in Carrollton is sfogliatella, a shell-shaped pastry filled with ricotta and diced oranges. Inset, restaurant owner Massimo Errico, his wife, Simona Patierno, and their sons, Alessandro and Marco.

An Italian restaurant in Carrollton recently added some items to its menu that are sure to please almost any diner.

“I want to try to have something new” every now and then, Errico said.

The restaurateur and family man has been cooking since he was 15 in his native Italy. He and his wife, Simona Patierno, moved here in 2003, and he worked in other restaurants throughout the area before starting his own venture. They now have two sons, Alessandro and Marco.

“We do this with a passion of love,” Errico said. “Me and my wife work very hard, all day long. I try to get everything from Italy, even if it costs me more — but I know what I’m getting.”

Errico added an appetizer sampler platter to the menu. He also added entrees like penna alla vodka and margherita pizza.

The new additions really shine in the desserts section. The new additions include sfogliatella, a shell-shaped pastry filled with ricotta and diced oranges; profiteroles, a cream-puff type dessert; tartufo gelato; and baba rhum, a sponge cake dipped in rum.

“I don’t think it’s easy to find these desserts in Hampton Roads,” Errico said. “Probably I’m the only one.”

In addition to the new items, the restaurant also recently changed hours and is now open from 11 a.m. to 9 p.m. Tuesdays through Saturdays and 11 a.m. to 4 p.m. Sundays.