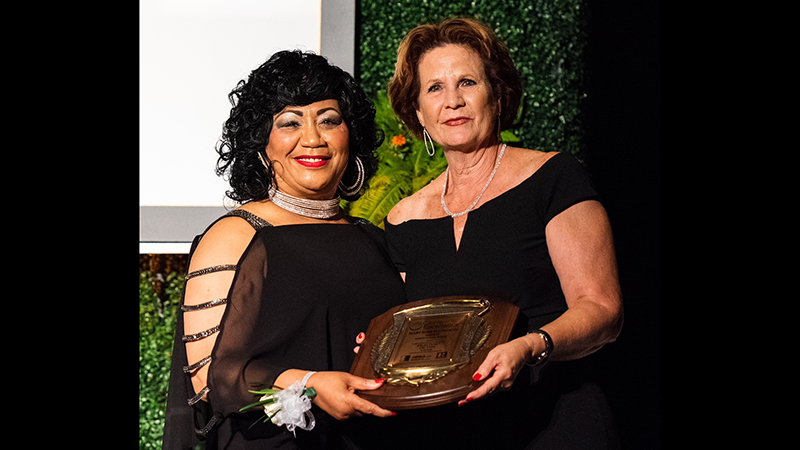 Mary Ross Ellsworth, right, was named the Hampton Roads Realtors Association’s Realtor of the Year for 2020 during HRRA’s Circle of Excellence Awards Gala on July 31. Tanya Monroe, HRRA chairman of the board, presented the award. (WhiteRidge Visuals)

A Suffolk resident and Realtor earned the highest honor at an awards gala for 2020.

Mary Ross Ellsworth is a Realtor for Berkshire Hathaway HomeServices in Great Bridge and Harbour View. During the Hampton Roads Realtors Association’s annual Circle of Excellence Awards Gala, she won the highest honor of Realtor of the Year.

“It’s very humbling, especially with who gave me the award was Donn Irby, who received it the year before,” said Ellsworth. “He gave a very passionate speech, but we are also close friends since serving on RPAC together. It’s nice having someone you know give you the award. I could retire right now and be happy.”

The Realtor of the Year recipient is nominated by their peers and is based on professional integrity, outstanding sales production and contributions to the industry and community. The criteria not only looks at the involvement of the current year but years past as well.

Ellsworth has been very involved since joining the Hampton Roads Realtor Association in 1977. She served as the association’s chairman of the board in 2001. She is this year’s Realtor Political Action Committee fundraising committee chair. She also served in this role in 2018.

“Most don’t want that position, but the work is so important,” said Ellsworth.

Along with her work with the Realtor Political Action Committee, Ellsworth volunteers to better her community as well. She organizes three blood drives a year and brings in homemade food for the donors. She also does volunteer work with her church with its homeless program and building fund.

Even though she has been nominated numerous years, this was Ellsworth’s first year winning Realtor of the Year. She has won other awards in the past, including 16 Circle of Excellence awards for production and longevity and Realtor Volunteer of the Year in 2018, which is a different service-based award.

“I know my name had been submitted in the past, but there have been people who have done more service,” said Ellsworth. “It’s amazing to hear what they all accomplish.”