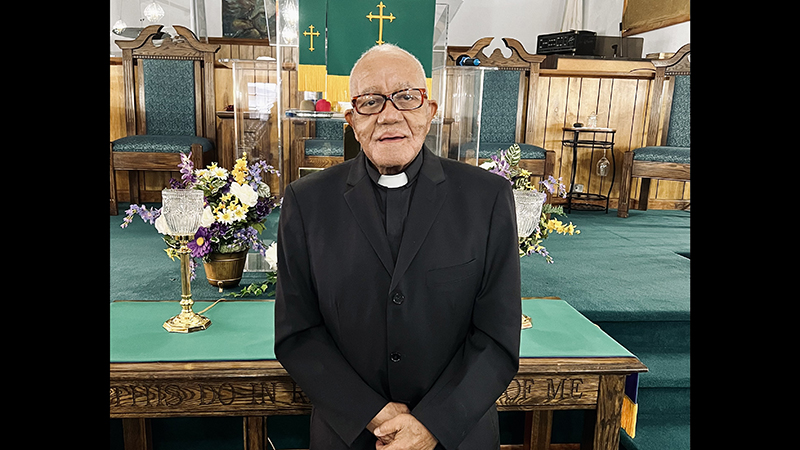 Members of the Greater Sweet Beulah Apostolic Church as well as the community as a whole will soon be celebrating the career and birthday of Pastor Bishop Madison G. Copeland.

Copeland will celebrate his 90th birthday, the 60th anniversary of his ministry and his retirement this year. A celebration will be held from 7-10 p.m. Friday, March 25, at the Portsmouth Renaissance Hotel. The guest speaker will be Theodore L. Brooks Sr., presiding bishop of the Pentecostal Assemblies of the World.

Copeland began preaching at age 12 and became officially licensed to preach in 1947 at age 15. He became an ordained elder in 1962, and he is the last surviving minister licensed and ordained by the late Bishop Samuel L. Grimes, who was the longest-surviving presiding bishop of the Pentecostal Assemblies of the World from 1933 to 1967.

Copeland grew up in this area and has been a member of Greater Sweet Beulah, located on Maple Street off of East Washington, for most of his life.

“I grew up in the old Nansemond County, before it and Suffolk merged, I was baptized in what is now Lake Meade and I’ve been a member of this church since I was about 11 years old,” he said. “I also helped build the church that stands here now.”

He has become a pillar in the lives of members of the church as well as the community. “I find that pastoring isn’t only here on Sunday mornings, but it’s an everyday thing. People need me more than just ministering to them on Sunday mornings, so I have to reach out and be there for them when they are in trouble,” said Copeland.

He feels ready for retirement as he has been training a successor, Elder Keithston Ferguson, who will be taking over for Copeland later this year. “I feel happy about it. I have a successor that I trust. I love these people and I didn’t want to leave them in just anybody’s hands, but I know that Elder Ferguson is going to do right, so I don’t have to worry,” Copeland said.

To honor the impact that Copeland has had in the community, the church will be “adopting” Maple Street and the corner of Mulberry Street in his name and is encouraging volunteers to help with the community cleanup.