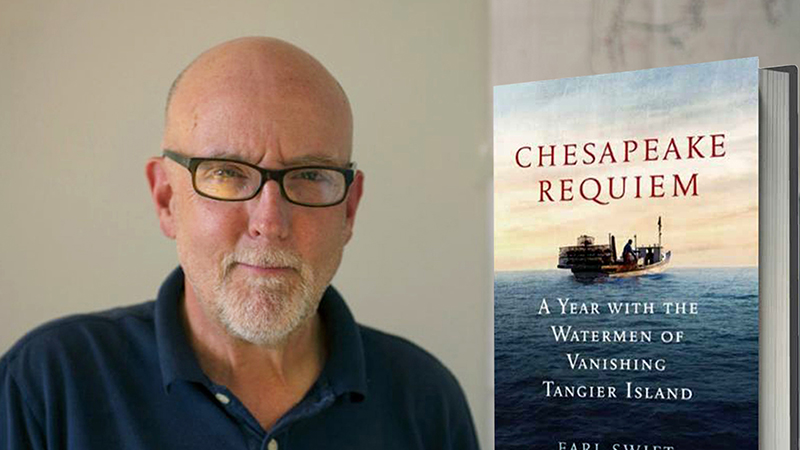 At the March 29 event, author Earl Swift will discuss his book “Chesapeake Requiem,” which recounts his experiences living on Tangier Island, the geography and the seafood of the island, and, of course, the culture and the people there.

On Tuesday, March 29, at 5:30 p.m. the Suffolk Literary Club will celebrate its 125th anniversary at the Suffolk Center for Cultural Arts.

The event was originally scheduled for 2020 but was postponed due to the COVID-19 pandemic.

The Suffolk Literary Club is the oldest continually-meeting book club in the area and one of the oldest in the commonwealth. It was started by 15 women who just wanted to discuss literature. The club now consists of 30 women who meet monthly in one another’s homes.

Most of the people in the club are descendants of club members, giving the organization a family feel.

“We currently have one family that represents three generations of club members,” said Sue Woodward, historian. “We recently accepted a daughter of a member whose grandmother is also a member of the club — it gives these families something to share.”

At the March 29 event, author Earl Swift will discuss his book “Chesapeake Requiem,” which recounts his experiences living on Tangier Island, the geography and the seafood of the island, and, of course, the culture and the people there.

“Due to sea-level rise, land subsidence and other environmental concerns, there’s concern that Tangier Island will disappear by 2050,” said Maryanne Persons, a former president of the Suffolk Literary Club.

Swift will also have a book-signing after the event.

He began writing as a teenager and has written seven books and hundreds of feature stories for newspapers and magazines. He was included on “Best Books of 2018” lists for the Washington Post, NPR and other outlets.

Swift has been a fellow of the Virginia Foundation for the Humanities at the University of Virginia since 2012 and was previously a Fulbright fellow in New Zealand. He is very knowledgeable of area waterways and is passionate about environmental conservation.

“We have several community organizations setting up displays relating to environmental issues and preservation. For example, the HRSD SWIFT program will be addressing the shrinking aquifer concern,” said Persons.

Additionally, the event will showcase the Suffolk Center for Cultural Arts’ “Walk on the Wild Side” exhibit depicting the beauty of wildlife throughout the region and world.

It will showcase wildlife artists working in woodcarving, paints, sculpture, photography and mixed media. The six featured artists are carvers Jim Gordon, Art Latimer, Marty Linton and Doug Brady, wildlife painter Linda Phillips and wildlife photographer and painter Janet Ogren. The exhibit will begin on March 24 and will be up through May 3.

The anniversary event is free to attend, but attendees are encouraged to reserve their spot at www.suffolkcenter.org. The exhibit begins at 5:30 p.m. and Swift will speak at 6 p.m. Facial masks are required.