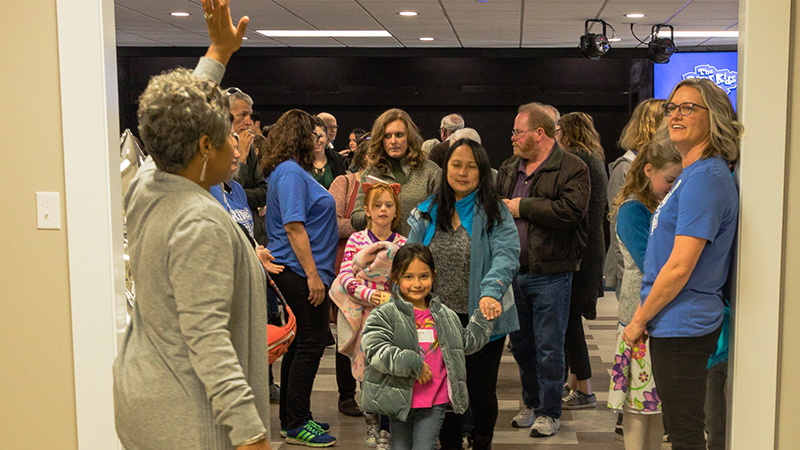 “River Kids Cove” was dedicated on Sunday, March 13, and will now be the hub of worship for children who attend the church.

Riverbend Church is non-denominational and began services in 2012 with Pastor Bobby Hill and his wife, Carrie. They believed that a vibrant and lively church in Suffolk would have a positive impact on the community. They also believe that it doesn’t matter where you’ve been or what you believe, that God welcomes you just as you are and wherever you are.

When the church started, members were moving around to temporary locations until they moved into their current location at Bennett’s Creek Square in 2015.

However, the location wasn’t designed to accommodate all of the children attending services.

“We’re a very family-oriented group,” said Rev. Hill, the senior pastor at Riverbend. “On any given Sunday, we will have somewhere between 40 and 50 kids come to our church.”

So they knew they would need to come up with a solution.

Toward the end of 2021, renovations began on a neighboring building to turn it into River Kids Cove.

Several church members volunteered to help with the renovations, which concluded earlier this year.

This will also give the kids a sense of community and a chance to get to know one another as well as their teachers, who are volunteers within the church, so that when it is time for them to move up a class, they will already be familiar with everyone around them.

River Kids Cove is designed for infants up to children entering the fifth grade. The facility gives the children their own place to worship where they will be taught a lesson and then complete an age-appropriate activity.

“It’s important that we celebrate these children, so they know that they are special and they don’t have to be a grown-up to love and worship Jesus,” Jordan said.