Navy plates to hit the road this summer 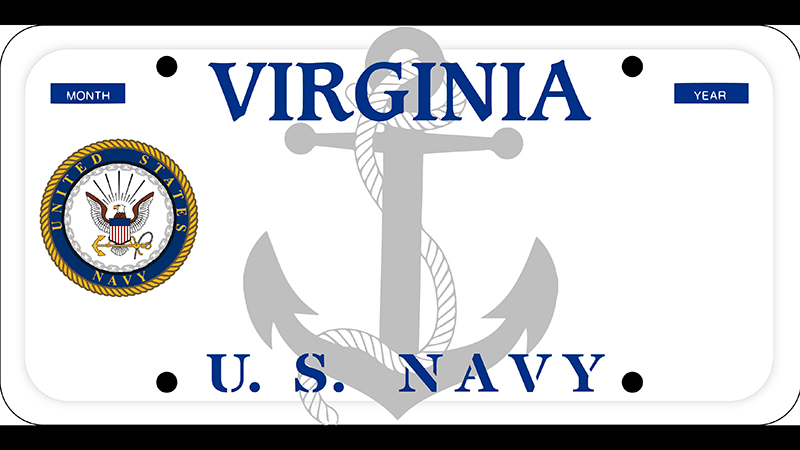 Roger Hirsh, himself a Navy veteran, began pursuing Navy license plates back in 2017 when he noticed that option wasn’t available in Virginia.

“The problem was, I went to the DMV to replace my old plates with Navy plates and found that there wasn’t one,” he said. “I had a bunch of friends that had Army, Marine Corps and Coast Guard plates, but I couldn’t get a Navy plate.”

He soon began working toward getting a Navy plate bill passed by the General Assembly.

The biggest hurdle Hirsh faced was the Department of Motor Vehicles’ requirement of at least 450 pre-ordered plates.

“Most people didn’t realize that there were no Navy plates, and others thought, ‘Oh, how hard can 450 preorders be?’ and let me tell you, it was more difficult than I thought,” Hirsh said. After years of raising awareness online, with the help of newspapers and magazines and by word of mouth, the 450 paid preorders were submitted to the state in October. Then, the Navy plate bill was sent to the General Assembly, where it was passed by both the Senate and the House of Delegates.

The bill is now awaiting the signature of Gov. Glenn Youngkin to become law.

If that occurs as expected, the Navy plates will be processed on July 1. Pre-ordered plates will be mailed out shortly after the bill is passed. Navy plates are expected to be available for the public to order from the DMV in late July or early August.

The plate is available to all active-duty personnel and veterans and spouses who wish to show their Navy pride on the road.

The plate was designed with the help of artist and graphic designer Emily Eakes of Lawrence, Kansas.

“I connected with Roger through my boyfriend, a retired Navy chief who used to live in Virginia, as he was getting closer to reaching his pre-order goal,” Eakes said. “Roger needed a graphic designer but didn’t have a budget, so I agreed to do the work pro bono. From there I reviewed the requirements, researched visuals that would be meaningful and put together a selection of designs.”

It includes the Navy seal, the iconic fouled anchor and “U.S. Navy” in stencil format at the bottom.

“We chose the stencil format because when all Navy folks first go through boot camp or other programs, we do stencils on everything — all clothing and sea bags and things like that,” explained Hirsh. “Also, all of the shipping containers, especially the older wooden containers are stenciled. So it was kind of a nod to history and traditions of the Navy.”

The Navy plate is the only service plate in Virginia that is also a revenue share with the Navy-Marine Corps Relief Society, which will receive $15 for every plate sold. The NMCRS is a nonprofit, volunteer organization that provides financial, educational and other assistance to members of the naval services and their families.

Plates can be preordered through April 15 at navyplatevirginia.com or by mailing a form to Navy Plate Virginia, P.o. Box 7303 Portsmouth VA 23707.