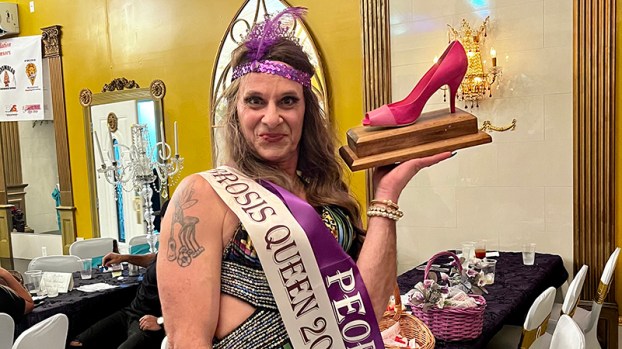 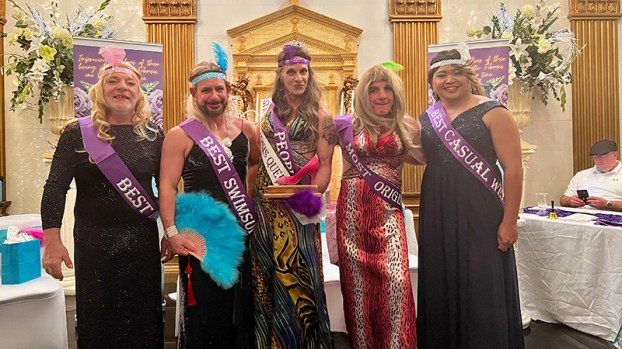 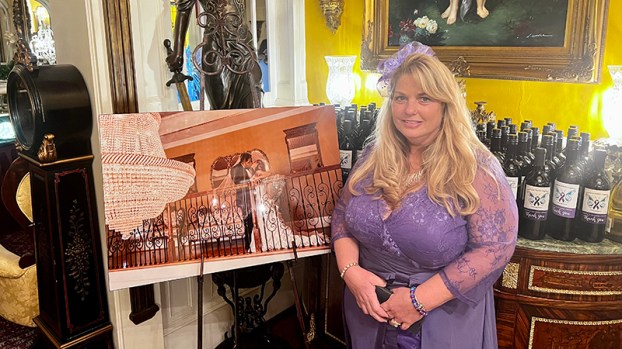 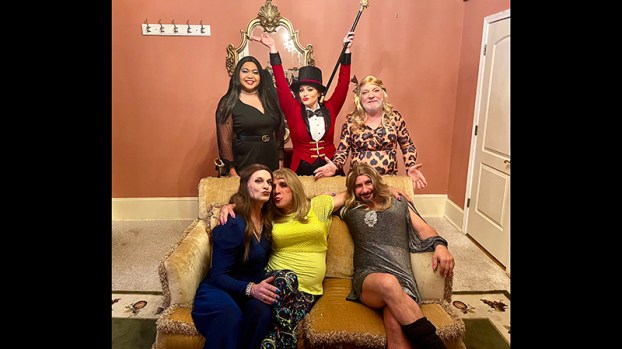 Contestants laugh off some pre-show jitters with "ring leader" Meghan Small (back center).

The pageant had around 140 attendees each night and raised over $15,000 for the foundation, which was created by Tina and Joe Natoli to honor their daughter who lost her battle with cystic fibrosis in April 2021. The foundation hopes to raise awareness of the disease and help those affected by offering scholarships and raising money to help fund lifesaving medications.

The night started out with a bang as Barbilicious (Joe Natoli) took the runway in her neon casual wear, sliding down the railing of the stairs and dancing with members of the crowd all the way.

After the opening festivities, the lights were dimmed and everyone, with their light-up butterflies in hand, participated in a “butterfly ceremony” in memory of Martina Natoli Lagman. The ceremony included the song “Send Me a Butterfly” by Nolan Neal and a heartfelt performance of “Butterfly Kisses” by Kent Adams.

After everyone cleared their tears, it was time for the talent portion of the pageant, and the ladies didn’t disappoint, Jay La (Jay Lagman), who flew in from Hawaii to participate in the event, kicked off the competition with a belly dance. She was followed by Barbilicious’s maraca dance, Joleen — Make it Rain’s (Joe Shannon) cheerleading routine, complete with skirt, pom poms and letterman jacket, Amy Locklear’s (Aaron Lockamy) passionate performance of “My Guy” by Mary Wells, then the definite showstopper, Ruby Sunshine’s (Steve Keeter) energetic performance of “Man! I  Feel Like a Woman” by country singer Shania Twain. Ruby walked the runway in “Daisy Duke” shorts, cowboy boots and a light-up cowboy hat, and by the time the song ended, the entire audience was singing and dancing along.

Next up was the highly anticipated swimsuit competition. The standout competitor for this category was Joleen — Make it Rain’s black bikini top, leopard skirt and heels. Other crowd favorites were Barbilicious’s costume change from a full-length dress to a one-piece swimsuit, and Ruby Sunshine’s patriotic blue-and-white bikini top and red coverup.

The ladies then rushed upstairs to change into their evening wear.

One of the most talked-about parts of the evening was a surprise performance by Meghan Small playing the part of the “ring leader” and the other contestants dancing a choreographed number to “Lady Marmalade” by Christina Aguilera while wearing their evening gowns.

The final part of the competition was the interview. The ladies answered several questions, including their role models, mistakes and what makes them different from other contestants. Jay La and Barbilicious agreed that their greatest role model was Martina Natoli Lagman.

“My biggest role model is my late wife because even when things were hard she lived life to the fullest,” said Lagman.

Joe Natoli added, “I would have to say (Martina) too because I watched her fight from her first breath to her last breath. She never gave up even when her body was shutting down. That’s why she is my biggest role model.”

After the interviews wrapped up, it was time to crown the winners.

Taking home both the People’s Choice Award and the crown for “Ms. Cystic Fibrosis Queen” was the one and only Ruby Sunshine.

Judge Kirk Harris explained their decision: “Ms. Sunshine really ‘outshined’ the competition in every category. Her talent performance was amazing!”