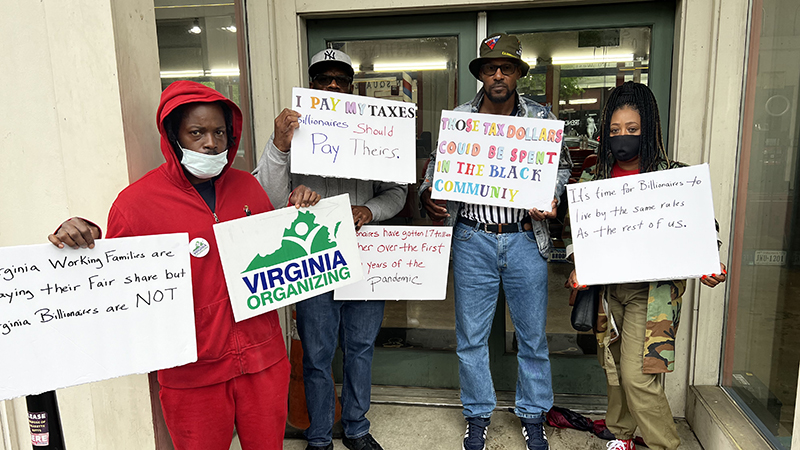 The Suffolk chapter of Virginia Organizing celebrated Tax Day on Monday by going door to door downtown to thank business owners and workers for paying their fair share of taxes.

According to the Virginia Organizing website, working families are paying their share of taxes, but American billionaires are not. Billionaires have gotten $1.7 trillion richer over the first two years of the pandemic, the group says. But because of a big tax loophole, many of them have paid little to no federal income taxes on those investment gains. Monday was the deadline for filing 2021 federal income tax returns.

Six members of Virginia Organizing met downtown, signs in hand, and walked, in the rain, to local businesses, including The Chop Shop Barbershop, Wall Street Cafe and the Workforce Development offices.

Though it was cold and rainy, member Vonita Williams insisted they stand on the corner of North Main and East Washington streets.

“It’s a busy intersection,” she said while holding her “I pay my taxes, billionaires should pay theirs” sign. “If we want people to notice us, we should stay right here.”

“I am paying my taxes, have been for many years, so billionaires should have to pay theirs too,” added Shown Reed, member of Virginia Organizing. Reed’s sign read “Those tax dollars should be spent in the black community,” a point that Cassandra Waters, also a member, agreed with.

“Most people don’t even know that billionaires don’t pay their taxes. That’s why we’re going around telling people, so they know that it’s a real problem,” explained Tony Jones, community organizer for Virginia Organizing.

Virginia Organizing is a nonpartisan organization founded in 1995 that aims to challenge injustice by empowering people with little to no voice to create change in their communities. The Suffolk chapter was created in 2018 and has focused on issues such as transportation, environmental problems and other injustices.

“Everybody has issues that’s important to them and affects them, and getting out in the community and talking to people is really the only way to get things done,” said Tion Ashby, another member of Virginia Organizing.

For more information about the group, visit virginia-organizing.org.