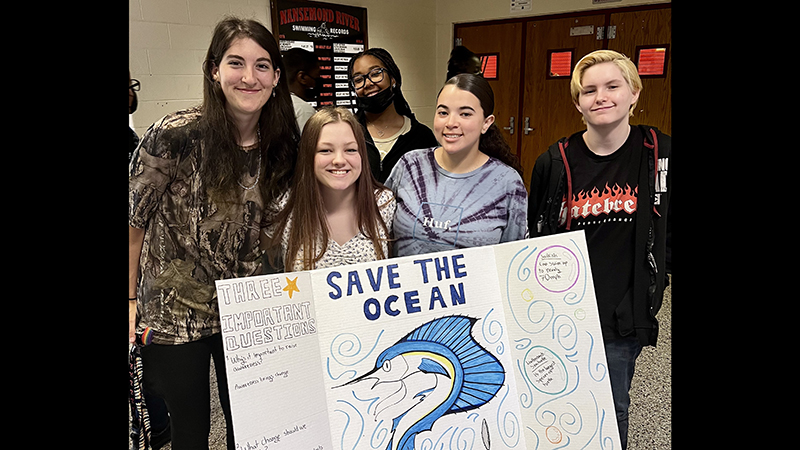 During April, the students have been doing research-based assignments to learn more about environmental issues and solutions to address them.

The first project was “Love Letter to the Sea.” Students handwrote letters from the perspective of the ocean in which the ocean asked for help. In the letters, students chose a problem that the ocean is facing and asked whomever was reading the letters to help. The issues and the solutions were backed up by research that the students conducted.

The letters will be mailed out to environmental leaders across the world.

For the fair, students formed groups, chose one issue that they would like to focus on and created a demonstration based on that issue and a themed game. During their lunch period, other classmates could play these games to earn prizes like reusable cups, bags and metal straws.

The students were led by oceanography teachers Angela McElroy and Jessica Koury. This year’s event was funded with the help of the Green Star teacher award that McElroy was awarded earlier this year. The award is funded by askHRgreen.org and recipients are given a $1,000 grant to help fund supplies and resources to aid in an educational program. “We plan to make this an annual event. We were funded this year by the Green Star grant, but next year the students will have to fundraise,” said McElroy.

At the Save the Ocean booth, classmates had to clean plastic beads out of a cup of water to demonstrate garbage in the ocean.

“I think a lot of people just don’t understand how much trash enters the ocean and how it affects not only our lives but also the sea life,” said oceanography student Kymber Sieber. “We just want to help people understand what is going on and how many animals are affected by it.”

This booth was also in charge of the class clownfish, whose name changes depending on whom you ask.

In addition to the student booths where classmates could play interactive games, the event included community organizations like Keep Suffolk Beautiful that were there to educate students about volunteer opportunities, City of Suffolk Public Works staff, who gave a demonstration on the watershed and pollution, and JB Rattles’ traveling reptile show, which brought snakes, an alligator, a tarantula and a turtle for students to hold.