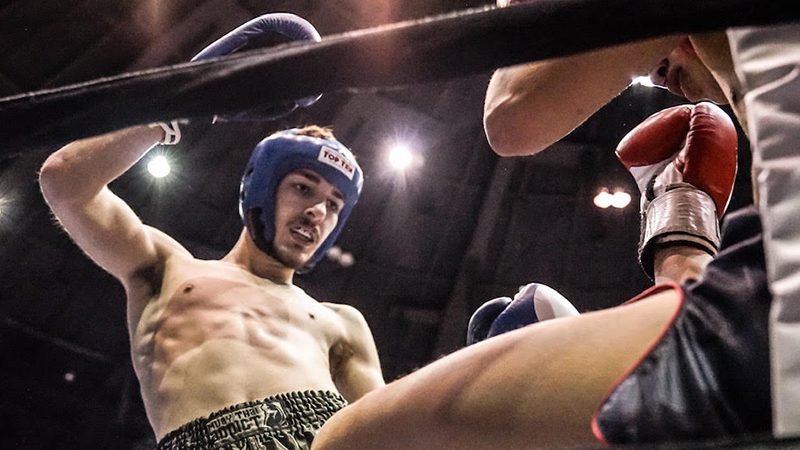 Landon Jones, a junior at Nansemond River High School, is involved in a less traditional sport. For the past five years, he has been competing in Muay Thai.

Muay Thia is a type of combat martial arts that originated in Thailand. The sport consists of three rounds and allows competitors to punch, kick, elbow and knee.

Growing up, Landon loved watching professional wrestling. As he got older, he realized that wasn’t the right path for him, so he started watching Mixed Martial Arts fighting (MMA) and the Ultimate Fighting Championship (UFC), which combine different types of martial arts. He then decided to pursue Muay Thai.

“When I was a kid one of my biggest fears was getting beat up, or being put in a position where I could get hurt, so I learned Muay Thai,” said Jones.

Landon said though his dad, Ben, has been on board since day one, his mom, Anne, was a little hesitant, “My mom supports anything that I do, but she really wanted me to be a politician.”

Landon is currently training at The House of Muay Thai in Norfolk with trainer Jake Chamberlain. He is also on the World Association of Kickboxing Organizations (WAKO) United States Muay Thai Team as well the World Kickboxing Association (WKA) United States Team. He is currently the International Kickboxing Federation (IKF) East Coast Champion for his weight class with a record of nine wins, two losses and one draw.

Later this year he will travel to Ireland to represent the USA in a national competition.

Landon named fighter Kevin Ross as his biggest inspiration. “I look up to him a lot because, with Muay Thai, you do it because you love it, and he’s someone who does it because he loves the sport,” he explained.

Though he is a championship fighter, outside of the gym Landon prefers to avoid conflict and remain peaceful.

“I feel like fighters get a bad representation as these big, tattooed guys that go around causing conflict, but in reality, most martial artists try to stay peaceful,” he said.

When he’s not in the gym, he’s doing school work. During the times he has been competing, he has maintained an A/B average and has maintained straight As through his junior year. “All of my teachers at Nansemond River have been really supportive, so I want to make them proud,” said Jones.

Landon hopes to attend college at Christopher Newport University, major in history and continue his martial arts career in pursuit of having a professional career.

“I just want to say, for anyone reading this, no matter what you decide to do in life, just don’t give up,” he said.