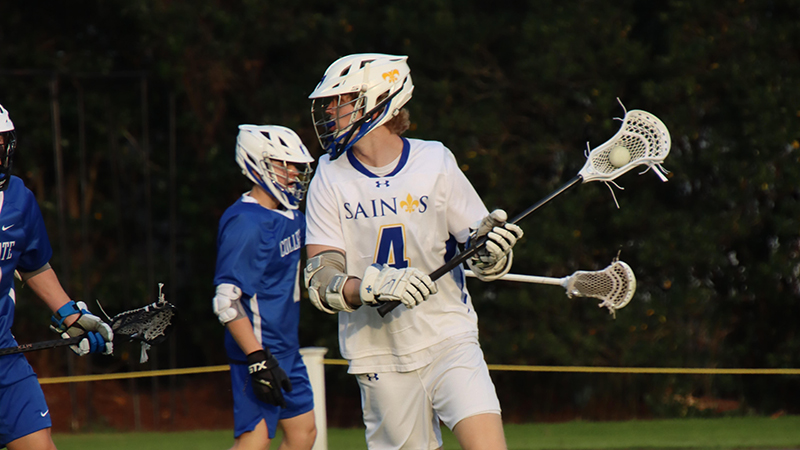 David Russell has been playing lacrosse since he was six years old and will be continuing his career next year at college.

David Russell, a senior on Nansemond-Suffolk Academy’s top-ranked lacrosse team, recently scored his 100th goal during a game against The Covenant School in Charlottesville.

Russell has been playing lacrosse since he was 6 years old when it was introduced to him by a family friend. After the initial introduction, he and his brother Max attended a lacrosse camp at the University of North Carolina, where he began to better understand and developed a love for the sport. He’s been playing ever since.

He was a starter, as a ninth grader, on NSA’s state championship team, has been a two-time team captain, and was first-team all-state as a junior.

He also plays basketball and was all-state in football.

Russell currently plays attack and midfield on the team with his brother Max, who is a junior.

“I love playing with him. He pushes me to be better and we’ve gotten closer because of it,” said Russell.

The brothers are the sons of David and Debbie Russell.

T.W. Johnson. Jr, head coach for varsity boys lacrosse and the director of athletics at NSA, said Russell “has always had a great desire to be the best he can be, and he’s done that.”

“I’ve been around David for nine years now, and his passion and enthusiasm for the game has always been really strong,” Johnson said.

When he’s not practicing sports, Russell is working on his schoolwork in order to maintain impressive grades.

Asked how he balances his time, he said: “I just do what I have to do. I work to get my schoolwork done so I can focus on the game when I am playing.”

One hundred career goals in lacrosse doesn’t happen often. According to Johnson, “In my almost 10 years of coaching here, only two others have reached 100 goals. It’s not an easy task.”

Russell plans to continue his lacrosse career at Hamilton College in Clinton, New York, while majoring in economics.

Hamilton College is a member of the New England Small College Athletic Conference which is the most competitive conference in NCAA Division III men’s lacrosse. The college also has an admission rate of 18%, making it a very selective school academically.