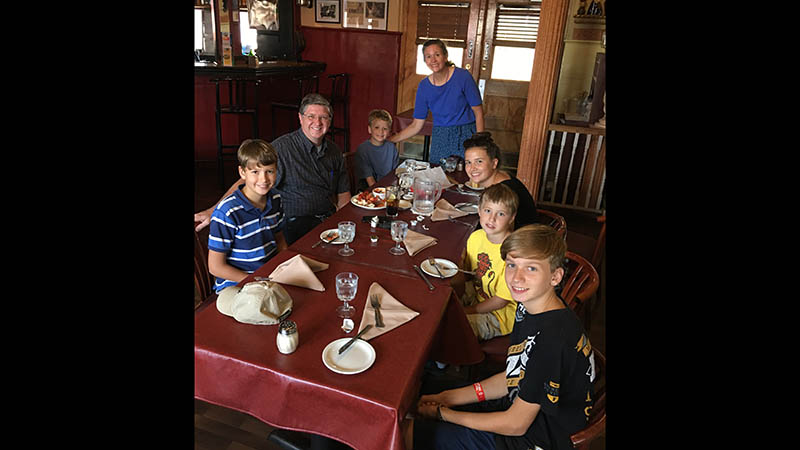 ​​Suffolk attorney Charles Havener has assisted in more than 200 adoptions, but now he and his wife, Lauren, are hopeful that they will soon adopt 11-year-old Vitya from Ukraine.

The Havener family has a special relationship with adoption already as Lauren’s sister was adopted from Ukraine when she was 7 years old.

“It has been a great honor to experience the excitement my parents had when they adopted my sister,” Lauren said. “It was a very special time for our family.”

Charles, an attorney in Hampton-based Haven Law Group, and Lauren have four biological children — Gloria (17), Samuel (14), William (12) and Joshua (8). They recently decided they wanted more children. Unable to have more biological children, they turned to adoption.

Lauren is a classical conversations homeschool instructor for their children.

Thanks to connections made through missionary work, the Havener family heard about Vitya and instantly knew he was special.

They quickly began the adoption process, including paperwork, a home study and fundraising.

Then, in July 2021, they were given the opportunity to host Vitya for one month through a group called Frontier Horizons, based in Virginia Beach.

When he arrived, Vitya had one change of clothes in his backpack, so the family quickly got him set up with new clothes and shoes.

Also, due to conditions in his orphanage and poor nutrition, Vitya was underweight and had to have eight rotten teeth pulled.

“You would think that having all of those teeth pulled would make him feel lousy, but nope, he never slowed down,” said Charles. “He ate everything we’d give to him and played with our boys. He was a little trooper.”

Vitya played baseball, went to the beach, visited a theme park, cut down a tree with an ax, took long showers and plenty of other fun things with the family. The Haveners live on a cattle farm in the Holland area, giving the kids plenty of room to run around.

“He just fit right in with our other children,” Charles said. “They all just had a blast.”

At the end of Vitya’s stay, he begged to stay and not be put back on the plane. Charles explained that he had to go back, but he promised that the family would adopt him.

After Vitya left, there was a void in the home.

“There was an emptiness at the dinner table, and we are just so ready to bring him back where he belongs,” Charles said.

The family was hoping to head to Ukraine in April to finalize the adoption process. Following the Russian invasion of Ukraine in March, that was not possible.

Immediately following the invasion, the Haveners were not given much information regarding the whereabouts or safety of Vitya. This was until late April, when Frontier Horizon headed to Poland, where they found Vitya and other members of his orphanage had fled.

The family scheduled a Zoom call with him and reassured him that they will be adopting him.

“Because there is a war going on, Ukraine has halted all adoptions. So we’ve been sad about the delay and concerned about Vitya, so we are just praying that when all of this settles, we will still be able to adopt him,” said Charles.

The State Department has been keeping the family updated on the situation in Ukraine and when adoptions and hosting programs are likely to start again.

Vitya celebrated his 11th birthday on Friday and the family was given the opportunity to call and wish him a “happy birthday” the day before.

Charles and Lauren are hoping that their story will inspire other families to consider adoption.

“All these kids want is something to love them and cuddle with them,” Charles said.