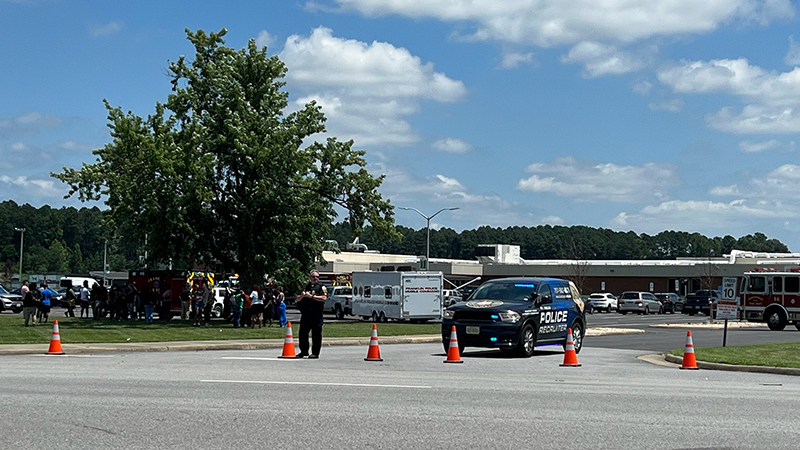 The Franklin Police Department blocks the entrance to Paul D. Camp Community College as emergency agencies respond to a bomb threat made against the school Tuesday, July 12, in Franklin. People at the college’s main campus can be seen gathered outside under the tree, away from the primary building.

Paul D. Camp Community College and The Tidewater News building were evacuated around noon Tuesday, July 12, due to a bomb threat made against the college.

A Franklin Police Department news release stated that at approximately 11:26 a.m., the City of Franklin Emergency Communications Center received a phone call stating that a bomb had been discovered at Paul D. Camp Community College, located at 100 North College Drive.

Members of the Franklin police, fire and emergency services responded to the scene and assisted in the evacuation of campus buildings.

Franklin Police noted that the Virginia State Police responded with explosive detection K-9s to assist in the search of the campus. All Camp Community College facilities were deemed clear at approximately 2:04 p.m.

People at the college’s main campus could be seen gathered outside following the evacuation around noon.

The back half of The Tidewater News building is now occupied by the Camp Community College Regional Warehouse and Distribution Training Facility, making the overall building one of the college-related facilities addressed in the response to the threat.

“Because we have the warehouse training in the back, they are bringing dogs to check out the warehouse, make sure it’s nothing here,” she said.

According to other media reports, Camp was one of several area colleges to receive bomb threats Tuesday, with others including Tidewater Community College in Chesapeake and Regent University in Virginia Beach.

In its release, FPD extended thanks to state police for their assistance.

The release concluded with police stating that if anyone has information about the bomb threat or other criminal activity within the city of Franklin, they are asked to call Franklin Police at 757-562-8575, Franklin Crime Solvers at 757-516-7100 or contact FPD online at p3tips.com. Information that leads to an arrest can earn the caller a cash reward while remaining anonymous.