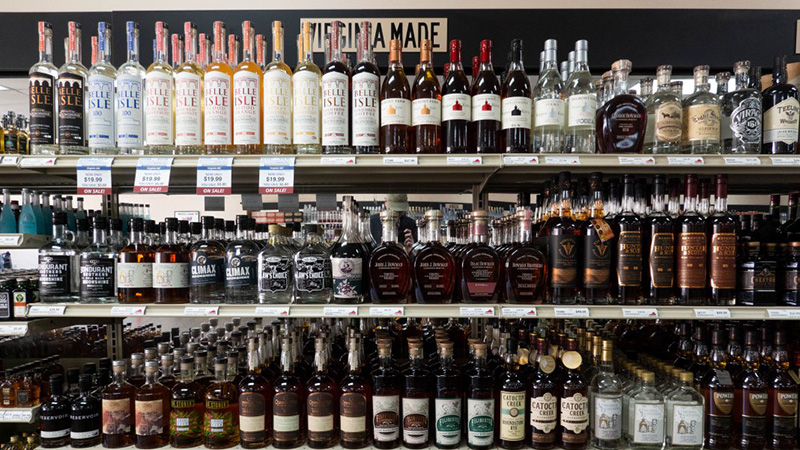 A display of Virginia-made liquors at a Richmond ABC store. (Ned Oliver/Virginia Mercury)

In the search for hard-to-find bottles of bourbon at Virginia ABC stores, some liquor enthusiasts have been worried about leaks of a more serious kind.

Employees of the government-run liquor monopoly would have access to highly valuable inside information about which products were going where, and the system could lead to some buyers getting tipped off early about stores that would be selling rare bottles of Blanton’s, Buffalo Trace or other brands, many bourbon collectors complained.

In April, when ABC was announcing a new, randomized “drop” system, where only a few stores are selected to put out their supply of limited-availability bottles, one commenter on the agency’s public Facebook page suggested someone had been trying to sell intel to bourbon buyers on where the best bottles would be.

“I had someone tell me that they have a back door into the VABC computer system … when they had the Stagg release they knew how many bottles were going to be at what stores,” another commenter wrote, adding a shrug emoji.

“Somewhat true but not entirely,” another commenter replied. “Insider info.”

An ABC investigation led to four felony indictments against two men who were arrested last month and charged with computer trespass and embezzling ABC’s inventory list.

One of the men charged, Edgar Smith Garcia, 28, of Manassas, was an ABC employee who was allegedly passing along internal agency information. His accused co-conspirator, Robert William Adams, 45, of Chesapeake, was allegedly selling that information to buyers he contacted through online bourbon hunting groups, according to David Stock, an assistant Henrico County prosecutor handling the case. Stock also serves as special counsel to the grand jury.

Court records show Adams and Garcia were both released on bond after their arrests. Attorneys for the two men did not respond to requests for comment Wednesday.

“In April, following a review of how these products are sold, we adjusted our distribution methods to provide all customers with the greatest opportunity to purchase limited supply products,” ABC spokeswoman Dawn Eischen said in a statement Tuesday afternoon. “Based on complaints and our own observations ahead of the changes, we and other law enforcement entities conducted an investigation that resulted in charges against Robert Adams.”

Eischen initially refused to say if Adams worked for the agency, citing an “ongoing criminal investigation.” The agency’s original written statement, made in response to the Mercury’s inquiry about Adams, made no mention of Garcia.

ABC officials only acknowledged Wednesday that an ex-employee was also facing charges, after Stock told the Mercury the case involved two defendants, not one. Garcia was employed as a lead sales associate, officials said, from Feb. 2020 through March 25 of this year.

“We have identified a case where an employee violated ABC policy in the use of inventory information,” said agency CEO Travis Hill. “And we are now working with the commonwealth’s attorney to charge that individual criminally.”

Privately-run liquor stores in other states have more flexibility in how to handle a mismatch between supply and demand. They can raise the prices of highly sought bottles, or set them aside for top customers. In Virginia, where all liquor stores are operated by the Virginia Alcoholic Beverage Control Authority, it’s a more complicated task.

For the rarest bottles like Pappy Van Winkle, ABC holds occasional lotteries, where buyers are picked via random drawings. Until recently, other in-demand bottles were put on the shelves as soon as stores received them, a system that gave rise to online groups dedicated to tracking which stores were getting which bottles. Some of that could apparently be done with publicly available information on ABC’s website, and third-party websites popped up aiming to make that info more accessible to bottle hunters. But in the quest for the best bourbon info, exclusive knowledge could be the difference-maker.

The randomized drop system ABC announced in April was pitched partially as a way to increase fairness and “limit opportunities for individuals or groups to line up outside stores for extended periods or seek information that gives them an unfair advantage.”

The bourbon collecting craze, which hobbyists say took off during the pandemic, has also created a robust online shadow market, where bottles that go for $50 to $100 in an ABC store can fetch hundreds for “flippers” who have no interest in drinking them.

A Facebook account that went by the name “Rob JD” or “Rob Adams” wasn’t particularly secretive about offering inside ABC information for a price, according to numerous screenshots of online exchanges shared with the Mercury, and at times bragged that ABC wouldn’t catch on to what was happening. Stock confirmed that account was involved in the criminal case, and ABC officials said the investigation began due to complaints coming into the agency.

On ABC’s Spirited Virginia Facebook page, several commenters have praised the new randomized bourbon system, saying it seems to be giving everyone a fairer shot. Others are skeptical that the leaks have been fully plugged, and some have complained about a new set of problems arising with the mad dashes to stores doing bottle drops.

“I’d rather see the long lines in the morning as opposed to what I saw at a store out here in Richmond,” wrote one commenter. “Literally 7-8 cars speeding, swerving around the parking lot racing to get in the store. Somebody gonna get hurt out here.”