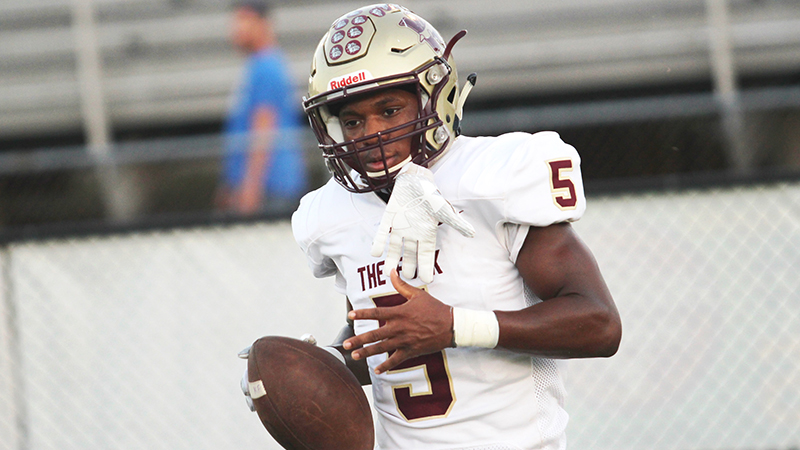 King’s Fork’s Kaletri Boyd managed three touchdowns, one returning the ball on a kickoff, one as he caught a pass and the third rushing, helping lead the team to a 41-0 win over Smithfield.

Three area teams picked up gridiron wins Friday night, while one dropped its first game of the season.

Nansemond-Suffolk Academy, Kings Fork and Nansemond River all defeated their opening week opponents, while Lakeland fell in its second contest of the fall season.

There was not a lot of tackling in NSA’s 56-49 triumph over Blue Ridge, yet plenty of head-spinning action from the two offenses. Helping the Saints outlast the Barons on the road was senior quarterback Gabe Wansart, who turned in a masterpiece with 474 yards passing, six touchdowns and no interceptions to go with another 40 yards on the ground and a rushing touchdown.

“As a coach, you tend to look at the weaker points of the game and not focus enough on the positives.  But there were plenty of positives to look at offensively,” said NSA coach Mike Biehl.

“It was probably our quarterback’s best game of his career,” Biehl said. “Gabe made a ton of plays, and when we needed something, he gave it to us along with our skill guys.”

Another multi-sport athlete from basketball, Caden Bradford, chipped in four receptions for 180 yards and a pair of scores.

NSA’s first game was suspended due to lightning in the second quarter against North Cross, trailing 26-0.

Anthony Joffrion’s Bulldogs put forth a strong effort to kick off the 2022 campaign in blanking the Smithfield Packers in a non-district road opener.

“I think we played really well and as a family.  We were able to get pretty much everyone into the game and a lot of guys got that first game varsity experience,” Joffrion said.

“To be honest, the last time we played was against Maury, so we had a bad taste in our mouths since the scrimmage. We coached them really hard for two weeks and they corrected a lot of those mistakes.”

Kaletri Boyd found the endzone three different ways, including on a 94-yard kickoff return and 35-yard reception to go with a rushing touchdown.  Another senior, QB Cameron Butler, completed 6 of 11 passes for 126 yards and a pair of touchdowns to go with 35 yards rushing.

Tailback JaVon Ford not only rushed for 72 yards and a couple of scores on nine carries, but successfully booted through five extra points.  Fellow sophomore Jahmel Mackey made three catches for 53 yards.

Defensively, the Bulldogs saw seniors Ronald Rhodes and Isayah Singleton as well as junior Jacolbe Leonard each get to the quarterback and register a sack.  Singleton and Rhodes also recovered fumbles.

King’s Fork will visit Southeastern District rival Indian River, which is 2-0, on September 10th in a highly anticipated matchup.

“They look really good on film,” Joffrion stated of a Braves team that has outscored opponents 71-12 thus far.  “I’m very excited for this upcoming week.”

Sophomore running back Melvin Brown helped provide some separation with an 81-yard touchdown run with 6:15 remaining as the Warriors held off Southeastern District foe Great Bridge on the road.

“Melvin was awesome. That play he had was really big,” said Warriors coach Alonzo Ricks Jr.  “He played last year on J.V. and has been doing well throughout the summer. When his number has been called, he’s been responding.”

The only other time Nansemond River found the end zone was on Damonte Bassette’s 12-yard touchdown run in the second period. Great Bridge limited the Warriors to just 193 total yards of offense in a physical, defensive battle.

“It was hard-fought. Coach [Curtis] Campbell did a great job getting those guys prepared and kudos to them,” Ricks added. “Our defense found a way to make stops and plays. When they started moving the ball, we just made sure we protected our end zone.”

On defense for the Warriors, Jayden Bradley made two interceptions, one to end each half, preserving a 2-0 start for the Warriors before a key tilt with Western Branch (2-0) on Sept. 9 at King’s Fork.

After notching a 25-10 victory over Manor in Marcus Cutler’s coaching debut, the Lakeland Cavaliers fell to 1-1 overall on the season with a 33-22 loss at Southampton.