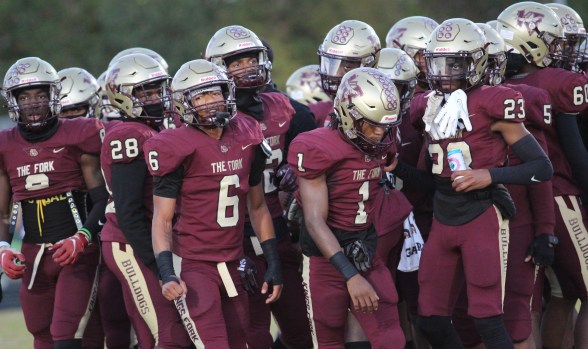 The Bullodgs are working to earn the No. 1 seed in the Region 4A playoffs so that all roads come through Suffolk this November. 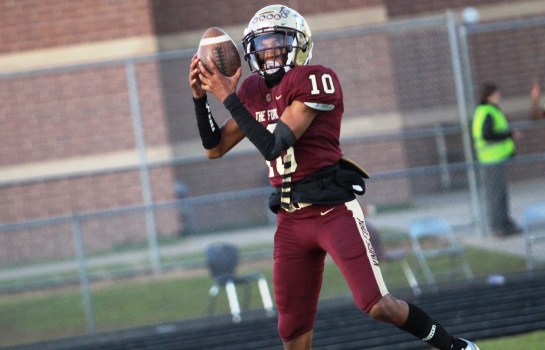 Malachi Nixon catches the ball for the Bulldogs as they worked to come back in the second half of Friday’s game that saw the Tigers hand them their first loss of the season. 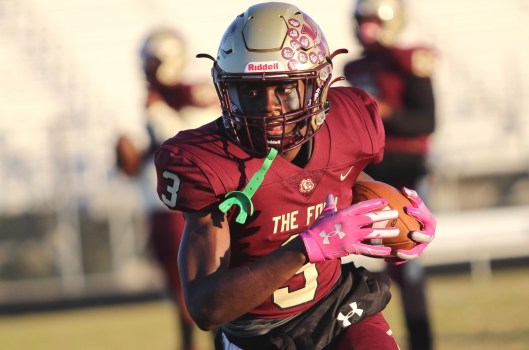 King’s Fork sophomore receiver Denosh Rodgers takes the ball from the Bulldogs quarterback to cap an 11-play, 60-yard drive with a touchdown.

In front of a packed crowd, the King’s Fork Bulldogs played host to the reigning two-time State Champion Oscar Smith Tigers in Suffolk Oct. 14 with anticipation of a classic much like they had the last time the two Southeastern District schools met in the city five years ago.

For the game’s first 20 minutes, it was shaping up that way as King’s Fork quickly erased a 14-0 deficit and claimed a 21-17 lead a little more than midway through the second period. However, from there, it was all Oscar Smith as the Tigers scored the game’s final 35 points – including two critical touchdowns in the final four minutes of the first half – to hand the host Bulldogs their first loss of the season, 52-21.

“I think we had a great week of practice, but at times, we didn’t make plays when we needed to make them. When they had opportunities to seize the moment, they took it,” said King’s Fork head coach Anthony Joffrion, who played for Tigers coach Chris Scott at Ocean Lakes. “As a team, we have to find a way against opponents like Oscar Smith to find momentum, especially in key spots, and swing it our way.”

When Oscar Smith returned the game’s opening kickoff 90 yards for a touchdown and then followed it up with a 62-yard punt return for a touchdown literally three minutes later, it put the Bulldogs in a double-figure hole for the first time all season.

“It was huge,” Joffrion said of those special teams plays looking back. “I wouldn’t say we came out flat as much as they came out and executed. They’re experienced coaches over there, two-time defending state champions. They’ve been through the fire. We just have to do a better job coaching, but we’ll all learn from it as players and coaches, and continue to keep working.”

The Bulldogs sliced into the deficit on a 30-yard touchdown pass from senior quarterback Cameron Butler to sophomore receiver Denosh Rodgers on a slant and go to cap an 11-play, 60-yard drive in 3:56. Afterwards, King’s Fork attempted an onside kick that was unsuccessful, yet the defense held the Tigers to a 23-yard field goal with 8:31 to go in the half that pushed the score to 17-7.

King’s Fork routinely kicked short much of the night. Joffrion explained his thinking behind those decisions.

“I was just trying to steal possessions since we were down 14-0 against a very talented, well-coached team,” he went on to say. “It ended up hurting us in certain spots. We didn’t execute, turned the ball over a lot and did a really poor job tackling, which we haven’t done all season.”

Even though King’s Fork would pull within three on a 56-yard touchdown run from JaVon Ford in the second quarter and eventually took the lead with 4:20 to go in the first half on a 16-yard TD pass from Butler to senior Ayden Lewis, there were too many miscues to overcome on the night. Plus, the Tigers capitalized on those chances through hidden yardage on special teams with regularity to go with intercepting Butler four times to create points off turnovers.

Now 6-1 overall, King’s Fork will focus on a trip to Hickory as they attempt to close out the regular season strong to secure the No. 1 overall seed for the Region 4A playoffs so that all roads come through Suffolk during the month of November.

“This was like a beautiful lesson for us to learn,” Joffrion said of the adversity his team experienced. “Our goal this season wasn’t to beat Oscar Smith. It was to win the state championship Dec. 10.  I honestly feel like this game is going to give us a lot of tools, a lot of film, for us to get better so we can get to Dece. 10.”