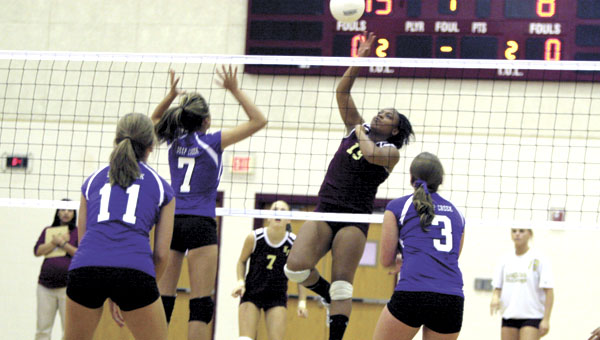 In a funny way, though, with the Lady Bulldogs holding a 5-5 overall record and four district wins so far after going winless last season, a victory while not hitting on all cylinders is one more sign that the Lady Bulldogs are headed in the right direction.

“I really don’t think we played our game tonight,” Whitfield said. “We finally got our passing together pretty well toward the end of the match, but we were so hot and cold tonight.”

“To come from nothing last year to having five wins under our belt halfway through the season, it says a lot about these girls,” Whitfield said.

“At the same time, I’m still expecting more out of them. Sometimes they become a little complacent and they just don’t realize yet how good they can be,” she said.

The win over the visiting Lady Hornets was fairly straightforward, except for a lapse once KF took the first two sets.

In the second set, KF led by as much as 18-10 before Deep Creek closed to within 22-20. The Lady Bulldogs regrouped to finish off the game with Jamika Townsend and Whitney Nichols scoring kills for the last two points of the set.

Townsend contributed in her usual setting role, but was a hitter when needed. She finished with nine assists and nine kills. Nichols had nine kills as well.

The Lady Hornets jumped out to a 12-4 lead in the third set and led comfortably the rest of the set.

Nichols came up with good plays hitting, blocking and serving early in the fourth set to put KF ahead 11-7.

Deep Creek rallied with a 10-3 run to take the lead before KF regained control for good.

Crystal Collins scored on a spike, then a Deep Creek hitting error and an ace by Monica Logwood tied the set at 17.

One of Townsend’s kills put KF ahead 20-19 and an ace by Taylor Beale followed. A Townsend kill and a block by Megan Blythe gave KF the final two points of the match.

Zach Johnson led the Bulldogs (1-9, 0-9) with 18 kills. Mark Kluck had five assists. Johnson and A.J. Jenkins had two blocks each.

Both King’s Fork teams host Lakeland Tuesday with the boys varsity match set for 6 p.m. and the girls varsity following.

Suffolk City Council wants an investigation by Suffolk’s Circuit Court judges into alleged misconduct by a member of the local... read more