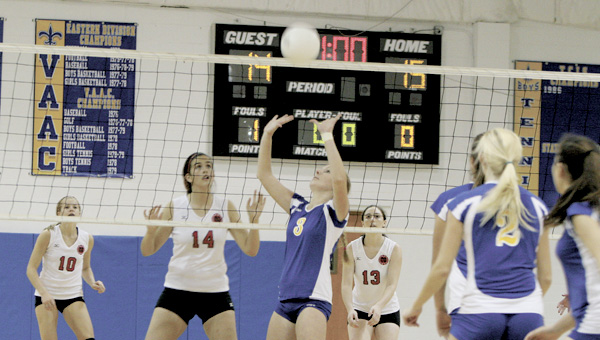 NSA (7-4) couldn’t find any of its usual attacking rhythm and it all stemmed from receiving North Cross’s serves.

“I think we found answers tonight. The only thing that went badly was serve receiving and that’s as simple as the girls not being used to standing beside certain teammates,” NSA head coach Robyn Ross said.

The Lady Saints gave up 15 North Cross aces and many other lost points without a chance for a Lady Saint hitter to swing away.

Ross, in her first season coaching the Lady Saints, didn’t change the players in the lineup, just their spots in the rotation. Even with a good record for the season and after wins this week on Wednesday and Thursday, Ross feels good about the moves she’s made.

“We changed it all today at 2 p.m. during our warm-up. I’m happier now than after most of our matches,” Ross said.

There were stretches against the Lady Raiders when NSA seemed just fine. Opening the match, the Lady Saints won six straight points on Kelsie Halberg’s serve and another long run on Tori Dail’s serve, including a couple aces, took NSA’s lead to 14-3.

Since NSA’s passing was a struggle the whole way, Halberg and Quinby Hines, NSA’s dual setters, didn’t rack up their usual assists. In the opening set, Halberg and Hines combined for one assist and Dail, NSA’s top hitter in most matches, had no kills.

NSA led 15-10 in the second set before North Cross rallied to take the lead at 17-16 and hold it from there.

From down 21-16 in the final set, kills by Dail and Kela Bogaard helped bring NSA back to within 21-20, but North Cross held on to close the match.

“We’ve found the answer now. It’s just going to take a couple practices with what I’m telling them to do,” Ross said.

The Lady Saints will have a little more time for practice next week with only two matches on their slate. NSA goes to Windsor Tuesday evening and starts conference play Thursday by hosting Hampton Roads.