JMU defender scores for Dukes, too

James Madison’s field hockey squad turned in a 3-0 week with victories over Longwood, Towson and Delaware.

Junior defender Lindsay Cutchins (Lakeland) played a major role in the JMU attack in two of the three victories. 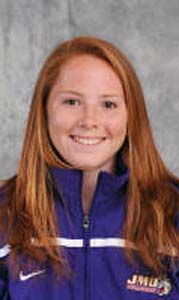 In a 3-2 win over Longwood Wednesday, Cutchins notched two assists. In JMU’s Colonial Athletic Association opener Friday at Towson, Cutchins scored a goal to make it 2-2 early in the second half. JMU went on to a 3-2 victory and Cutchins assisted on the go-ahead goal.

Cutchins has four goals and six assists on the season.

The JMU vs. Longwood match had Lady Cavaliers on both sides as midfielder Kaity Byrum is a sophomore for the Lady Lancers.

On Saturday in Farmville, there was another meeting of former teammates as Radford (7-3) defeated Longwood (2-7) 3-2. Radford junior defender Lynsey Daughtrey had her second assist of the season.

Byrum has played in all nine of Longwood’s matches with two starts this season. Daughtrey’s started all 10 Lady Highlander matches.

Senior Katelyn Yandle (Nansemond River) scored her team-high seventh goal of the season against Washington and Lee. Yandle’s totaled her seven goals on 15 shots on goal.

Randolph-Macon moved to 4-0 on the football season with a 48-14 rout over Frostburg State Saturday in Ashland.

The 4-0 mark is RMC’s best start to a season since 1986. The Yellow Jackets travel to Emory and Henry Saturday.

A Suffolk man has been charged with six felony counts after an incident early Sunday morning in which two other... read more