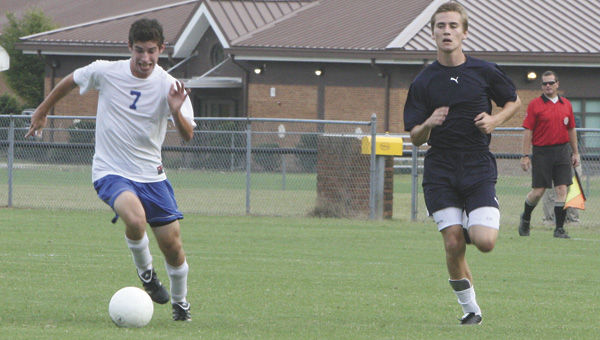 Nansemond-Suffolk’s Chris Sharrett moves in on the StoneBridge penalty box Tuesday afternoon at NSA. Sharrett had a goal and two assists in NSA’s 5-2 victory.

Nansemond-Suffolk’s soccer squad doesn’t have many more tune-up matches left, but the Saints made good use of one Tuesday afternoon by beating visiting StoneBridge 5-2.

A pair of penalty kicks, both sharply converted by sophomore midfielder Matt Atienza, gave the Saints the cushion of a 4-1 lead. Atienza scored his first 20 minutes into the match and the second six minutes after halftime.

The majority of the Saint schedule from here is against Tidewater Conference competition. NSA (3-6-1) opened conference play last Friday, suffering a 2-0 loss against Bishop Sullivan Catholic.

A wide-open, sprinting start by both sides equaled four goals in the first 20 minutes.

NSA got on the board with its first attack into the Cavalier penalty area. Atienza moved on the dribble down the right wing and sent a cross toward the opposite post. Zach Taves volleyed the ball back across goal, straight into the path of Chris Sharrett moving in on goal. Sharrett calmly put the shot away, making it 1-0 barely more than two minutes in.

The ease of the first Saint goal signaled a rout, but that wasn’t exactly the case.

StoneBridge tied the match in the 10th minute. NSA regained the lead in the 14th minute with Preston Firnstahl heading in a lobbed cross by Sharrett from eight yards off the goal line.

A few minutes later, off a Saint corner kick, Firnstahl was fouled trying to send another header toward goal. Atienza scored on the ensuing penalty kick, and NSA maintained its 3-1 lead through the rest of the half.

StoneBridge made it a 4-2 score just past midway through the second half and had a couple dangerous rushes forward that could have cut NSA’s lead to a goal.

The Saints still had most of the possession and scoring chances, and fewer fouls, through the second half. Taves finished the scoring in the 80th minute, poking in a short shot after a good cross from the left sideline by Sharrett.

The Saints return to TCIS play Thursday against visiting Hampton Roads Academy. NSA beat the Navigators 1-0, with a goal by Sharrett coming with three minutes remaining in the match, in a non-conference match two weeks ago in Newport News.