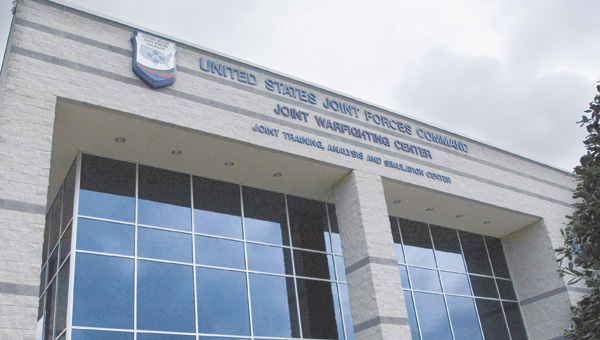 The Joint Warfighting Center at U.S. Joint Forces Command. Defense Secretary Robert Gates has proposed shuttering the command as part of a package of cost-cutting initiatives.

Senators clearly were not getting the answers they hoped to receive, so they instead used a Senate hearing of the Armed Forces Committee on Tuesday to publicly fire back at the Pentagon over a plan to close U.S. Joint Forces Command.

There were some arguments against the plan itself, but the primary point of frustration — made by both Republican and Democratic senators from Virginia and other states — was the limited information provided by the Department of Defense about how the analysis behind the decision was made.

“The lack of transparency and consultation — particularly with [Virginia’s congressional] delegation — stands in stark contrast to how decisions traditionally are made,” Senator Jim Webb (D-VA) told three Pentagon officials who had been sent to represent Defense Secretary Robert Gates at the Armed Services Committee hearing on Gates’ proposed budget-saving measures. The hearing had been called at Webb’s request.

“Seven weeks ago, we began making multiple requests, seeking answers to a variety of important decisions,” Webb added. “And to this point, we’ve been stonewalled.”

Webb and other senators on the committee repeatedly blasted the Department of Defense for ignoring requests for a cost-benefit analysis of the proposal to close the command, which employs more than 6,000 people, including 2,200 at a huge facility in Suffolk.

“The Department of Defense has failed to answer even the most basic questions with respect to cost-benefit analysis that shows what savings would be gained by closing JFCOM and how they would outweigh the elimination of the missions that JFCOM currently performs,” said Webb, who served five years in the Pentagon — one as a Marine, and four as an assistant secretary of defense and as Secretary of the Navy. “Seven weeks ago, we asked a series of questions that are data-oriented, that literally could be answered in one day. To this point, we’ve been stonewalled.”

“This has led many to conclude that there is no comprehensive analysis that would support the recommendation to close JFCOM,” Webb added. “It leads to the question of how serious DOD really is about lasting reform on a broader scale. We need to get our questions answered. We deserve to have a full understanding of the Department’s analysis and implications. We need facts.”

“His frustration reflects the kind of frustration I think many of us would have,” added Senator Carl Levin (D-MI), who chairs the committee. “There is an absence here of an analysis that’s been forthcoming, not just to Senator Webb, but I think, generally, publicly, on this matter. That material should have been available prior to the decision, not just after the decision.”

Attending the hearing on behalf of the Pentagon were Deputy Secretary of Defense William Lynn, Vice Chairman of the Joint Chiefs of Staff Gen. James Cartwright, and Undersecretary of Defense for Acquisition, Technology and Logistics Ashton B. Carter.

Lynn took the majority of the senators’ questions, and he said in an opening statement that JFCOM’s components “no longer effectively satisfy the purpose for which they were created.”

Acknowledging that “many of these changes will be stressful and even wrenching for many of the employees and organizations involved,” he said the Pentagon is “committed to work with the affected communities” to minimize the impact of the loss.

Lynn said several times that JFCOM’s work “doesn’t justify a billion-dollar command, led by a four-star general,” though he did not directly answer a question by Senator Joseph I. Lieberman (D-CT) about the net savings to be expected as a result of the closure.

Lieberman said he had been involved in the legislation that created JFCOM, and he wanted to be sure its mission was complete before agreeing with the proposal.

“I’m not stating my opposition to the proposal here, but I do want to ask, ‘Is it good for national security?’ Have we reached the point where we want to put up a ‘Mission Accomplished’ sign on jointness?”

Lynn stopped short of declaring joint operations training to be something of the past for the Department of Defense, but he said the choice Secretary Gates was presenting was about more than just saving money.

“I appreciate that you feel we have not shared as much information as you would like,” Lynn said in response to Webb’s statement. “This was a military decision.”

Tuesday was a morning filled with a little accomplishment and a lot of frustration for Virginia’s federal legislators who are... read more