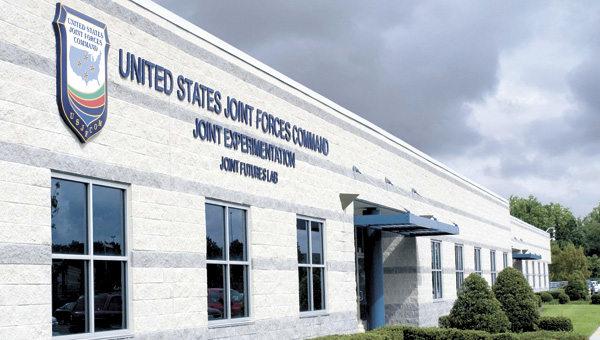 The Joint Experimentation Joint Futures Lab at the U.S. Joint Forces Command. A group of congressmen on Thursday called for Defense Secretary Robert Gates to be subpoenaed to testify in front of the Armed Services Committee.

Following a testy exchange with Pentagon officials on Wednesday, Congressman J. Randy Forbes (R-VA-04) told the chairman of the House Armed Services Committee that he would seek to subpoena the testimony of Defense Secretary Robert Gates if the Department of Defense did not attempt to more fully explain its plan to close U.S. Joint Forces Command.

On Thursday, he and 36 others followed through on the threat, submitting a petition asking Chairman Ike Skelton (D-Mo.) and ranking member Howard P. “Buck” McKeon (R-Calif.) to compel Gates’ testimony before the committee prior to implementing the plan.

The Pentagon announced Aug. 9 that closing JFCOM — which employs more than 6,000 people, including 2,200 at a Suffolk complex — would be one of the first steps in its bid to save $100 billion during the next five years. Forbes and other federal, state and local legislators immediately called on Gates to explain how the decision had been made.

Despite two days of congressional hearings this week, during which congressmen and senators grilled three Department of Defense representatives on the justification for the proposal, legislators still were frustrated with the limited written analysis they had been provided about the decision.

“A decision of this magnitude should not be made without careful reflection, supported by rigorous analysis,” stated a letter signed by Forbes and 36 other Republican and Democratic members of Congress from 22 different states.

“We have been told by the Department that the Secretary had several meetings and reviewed these decisions carefully. However, it seems clear that this decision did not carefully consider the national defense implications of such a change, nor is the decision substantiated with any sort of calculation of the direct and indirect costs to our national defense structure.”

Deputy Secretary of Defense William Lynn also was unable to provide an estimate during the hearings of how much money would be saved by closing JFCOM.

He and Forbes sparred during the House hearing over what information had been provided in response to repeated requests by congressmen and senators.

“Have you provided (us with) all the written analysis that was provided to the Secretary of Defense (regarding the proposal)?” Forbes asked repeatedly at the end of his period of questions.

“We have provided the committee a body of material … that supports the decision,” Lynn replied.

Forbes, who was visibly perturbed by the lack of a more direct answer, spoke to the issue in a press release on Thursday.

“Members of the Armed Services Committee are beyond frustrated with the unparalleled degree of Pentagon secrecy surrounding decisions that carry enormous impact on national security,” he stated. “We have been thwarted, blocked, ignored and stymied by the Department at every turn. We are now taking an unprecedented response to their unprecedented move to begin the unilateral, large-scale closures of our defense installations.”

Lynn, from the Defense Department, told congressmen the Department hoped to begin implementing the plan in the fall.

The letter, whose signatories include 32 members — a majority — of the Armed Services Committee — asks that the chairman “require Secretary of Defense Robert Gates to serve as an expert witness before this Committee prior to any further implementation of his announced initiatives in order to provide the Committee all information needed to assess, understand, and provide oversight as required by law. If the request is refused, we ask that you immediately utilize all means available to compel him to appear to testify before this Committee.”