Warriors are 7th at regions 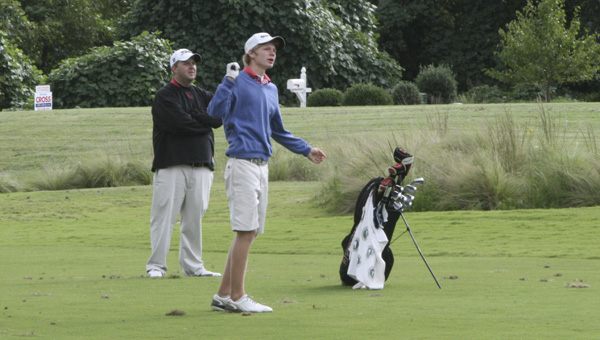 Nansemond River’s Griffin Genier and NR coach Craig Stephenson watch Genier’s shot to the ninth green Monday during the Eastern Region Tournament at Nansemond River Golf Club. The Warriors are seventh in the team standings with Tuesday’s final round to go. Genier led NR with an 80. The top two schools advance to the VHSL State Tournament.

There was more at stake as the Ryder Cup concluded Monday in Wales at the same time the Eastern Region Tournament started at Nansemond River Golf Club.

The weather and playing conditions however were remarkably similar between Newport, Wales and Suffolk.

After heavy rain for much of the last week, Nansemond River Golf Club was in great condition considering. A lot of the course was still soft and spongy though, making a long course play even longer. It was a gusty, overcast and, especially for the first couple hours after the morning tee times, a chilly day for the first day of the two-day, 36-hole event.

The course, with an assist from the conditions, took a toll on everyone except Kellam’s golfers.

The Beach District champs lead by 26 strokes, a huge margin, after shooting 7-over-par (295) as a team. The Knights make up three of the top five golfers after round one, including Alex Lloyd and Trey Smith who carded two-under-par 70s. Granby’s Christian Rivera also shot 70 to be the only other golfer in red numbers.

Nansemond River, after finishing tied for second in the Southeastern District Tournament, shot one of its highest team scores of the season with a 340, putting the Warriors in seventh place.

The top two teams go on to the state tournament. While the Warriors sit 19 shots behind second-place First Colonial, which is perhaps a navigable margin to make up in Tuesday’s final round, too many schools between the Warriors and First Colonial make it a tall task.

The six best individuals not on the two state-qualifying squads will earn individual berths into states. Peebles is close to the cut heading to Tuesday’s 18.

Those who go to the polls on Nov. 2 in the Chuckatuck borough will find two well-known names on their... read more