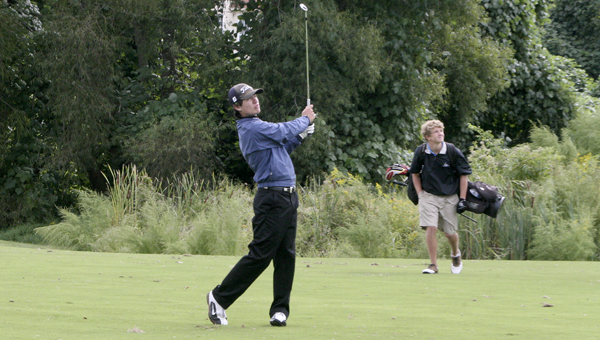 Nansemond River junior Travis Johnson qualified for the VHSL Group AAA State Tournament by shooting an even-par 72 in the final round of the Eastern Region Tournament at Nansemond River Golf Club Tuesday. Johnson birdied Nos. 3, 4 and 5 as part of coming from behind to claim an individual berth after shooting 82 Monday. It’s Johnson’s first time making the state tournament.

One shot, one putt lipping out, or one long putt holed out of nowhere, over 36 holes was all the difference for Nansemond River’s Travis Johnson and King’s Fork’s Adam Peebles Tuesday in the Eastern Region Tournament at Nansemond River Golf Club.

Johnson, a junior, made the VHSL (Virginia High School League) Group AAA State Tournament by one shot by shooting 10 strokes lower than his first-round score with an even-par 72.

Peebles, a sophomore, was on the wrong side of the cut line by one shot after rounds of 78 and 77.

Johnson, making the state tournament for the first time, did so with a great finish on his last nine holes, Nansemond River Golf Club’s front nine.

Simply getting through the back nine, though, meant he had a good chance to go low enough to come from behind and qualify for states.

“I always struggle here on the back nine and I shot one-over (37) on the back today, which helped a lot,” Johnson said.

Johnson carded three straight birdies on Nos. 3, 4 and 5, a par five and two par fours. On No. 5, a long par four with carries over ravines from the tee and on the approach to the green, Johnson reached the green in regulation and made a long birdie putt.

Johnson started Tuesday’s round likely four or five shots out of a state berth, depending on the two schools that earned team spots to states, after his 82 on Monday.

Kellam won the region championship and Kellam’s Trey Smith was the individual champ, shooting 70 and 71 to finish 3-under par. Western Branch finished second. The six golfers other than Kellam or Western Branch golfers qualified for states.

“I guess I was more relaxed today. I really didn’t have any pressure on me,” Johnson said.

“I had high expectations for myself after winning districts and I probably was trying to do too much,” he said.

Nansemond River moved up one spot in the standings to finish sixth as a team. The Warriors shot 340 Monday and 327 Tuesday. Griffin Genier shot 78 to go with his 80 in the first round. Shanice Mason’s 88 and Jacob Foster’s 89 made up the rest of NR’s second-round score.

Johnson and all of the Eastern Region golfers moving on to states will have a home-course advantage next week as Nansemond River Golf Club hosts the championship Monday and Tuesday.

Hornets blitz NR in first half