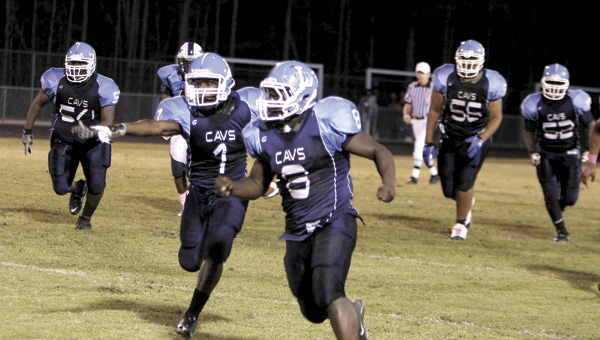 Indian River spoiled Lakeland’s homecoming by scoring the last 11 points of the game Friday night, with the last three being on a 33-yard field goal as time expired, for a 25-22 win over the Cavaliers.

Seeking their first win of the season, the Cavaliers did a lot right through most of the game.

As they’ve already done to Deep Creek and King’s Fork this season, though, the Braves rallied in the fourth quarter with a touchdown and two-point conversion with 6:58 left.

An otherwise entertaining and enjoyable homecoming evening at Lakeland was marred during the postgame handshakes when a large fight broke out on the field and rolled over toward the Lakeland sideline and track area.

Indian River took a 7-0 lead with its first possession of the game only for Lakeland’s defense to regroup and play great through most of the first three quarters.

The Cavaliers held Indian River to six rushing yards in the first half. IR gained two first downs in the half.

The backfield of quarterback Walter Boykins and backs Rackwon Johnson and Antonio Perry marched the Cavaliers on a 95-yard drive spanning five minutes of the second quarter. Johnson got the call five times for 59 yards and scored on a 28-yard run. Evan Worley’s kick tied the game.

Lakeland’s defense returned the ball to its offense quickly. A 29-yard screen pass from Boykins to Jaquan Demiel put the Cavs inside the IR 20. A couple snaps later, Boykins scored on a sneak from two yards out.

The Cavalier defense did the scoring itself just before halftime. With the help of a couple Brave penalties and Lakeland swarming Brave running plays, the Braves had to punt from their 1-yard line. The punter stepped out of bounds receiving the snap for a safety, giving Lakeland a 16-7 lead at halftime.

The teams traded scores in the third period. Lakeland put together an 80-yard drive. A 49-yard screen catch and run by Johnson covered most of the ground. Demiel caught a 17-yard strike from Boykins for the touchdown and a 22-14 Cavalier lead.

A short Cavalier punt set Indian River up at the Cavalier 32 for what turned into the game-tying score with 6:58 remaining.

The Cavaliers, on a handoff between Boykins and Johnson, fumbled on their ensuing possession.

Lakeland’s defense held, with Indian River missing a field goal, but Lakeland gained only one first down before losing the ball on downs.

On the second play of the drive, the Braves looked to have scored on a screen pass, only for a flag versus the Braves for a chop block. An Indian River holding penalty on the next snap put the Braves into 1st-and-45.

A 10-yard completion plus a 15-yard facemask penalty on Lakeland made it 2nd-and-20. The Braves had a minimal gain on their next play, a pass toward the sideline, before a late hit flag on Lakeland moved the ball to 3rd-and-1 at the Cavalier 21.

One running play moved the chains and another put the ball in the middle of the field with 0:05 left for the winning kick.

Lakeland travels to face Oscar Smith next Friday night. The Tigers are No. 2 in the state in the latest Group AAA, Associated Press Poll.