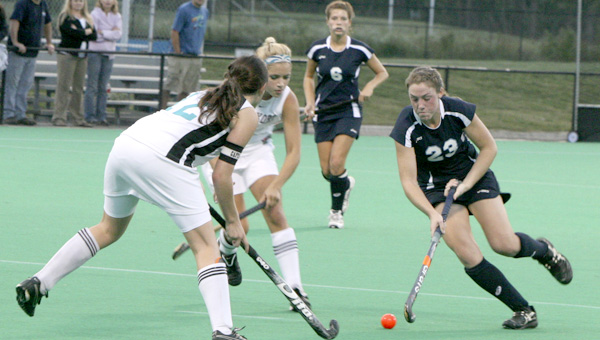 Lakeland’s Kelsey Smither scored two goals and had an assist in the Lady Cavaliers’ 4-0 win over Hickory Wednesday evening in Virginia Beach. Lakeland is 14-0 overall and 8-0 in the Southeastern District.

VIRGINIA BEACH – It took a little more work than normal for the Lady Cavaliers, but Lakeland’s field hockey team remained perfect on the season and in the Southeastern District Wednesday evening with a 4-0 win over Hickory at the U.S. Field Hockey National Training Center.

With an 8-0 district mark and one match left, Nansemond River coming to Lakeland Wednesday afternoon, the Lady Cavaliers (14-0 overall) are on the verge of the outright district title which would be Lakeland’s 11th straight regular-season title.

In the seven previous district wins, Lakeland’s outscored its opponents 53-0. Another rout looked likely after the Lady Cavaliers got the lead just over a minute into the match.

After attacking the Hickory arc straight from the opening whistle, Lakeland earned a corner and capitalized with a well-run play.

Summer Parker put the ball into play and Megan Johnson stopped the ball for a big blast on goal by Kendell Combs. Taylor Young, set up near the Hickory goalie, deflected the shot into the cage for the goal.

Unlike most squads going up against Lakeland, Hickory answered the goal with good composure. The Lady Hawks gained a fair amount of possession and kept at least some of the game in Lakeland’s half of the field.

“I think Hickory came in, crowded the circle and played a lot of defense,” said Lakeland head coach Tara Worley.

“We were having to work through a lot of girls. We had to think more about moving the defense around and drawing them out some,” Worley said.

While Hickory was testing Lakeland by the standard of most Lady Cavalier district matches, Lakeland still allowed no shots to the Lady Hawks. By the end of the night, Lakeland had a 28-0 advantage in shots and a 12-0 margin in penalty corners.

Hickory kept it a one-goal game until early in the second half. A flurry of three goals in six minutes decided the outcome.

Lakeland’s second goal also came from a penalty corner. It wasn’t as pretty as the opening goal, as the initial pass escaped past the top of the Hickory arc.

Combs passed to Smither for a shot from just inside the circle. Jennifer Hedrick found and gathered the ball in a bunch of traffic a couple yards from the goal then pushed it past the keeper.

Smither’s shot found the goal on its own less than two minutes later. A simple-looking wrist shot from well out on the right wing had the power and accuracy to stay inside the far post.

Smither made it 4-0 four minutes later, in the 43rd minute, as she shot and the ball deflected off a Hickory stick and by the keeper.

“Sometimes it just take one extra goal (to make it 2-0) to loosen up and then play better,” Worley said. “We talked about what we wanted to do at halftime and then we executed it pretty well.”