Lakeland’s Hunter off to good start 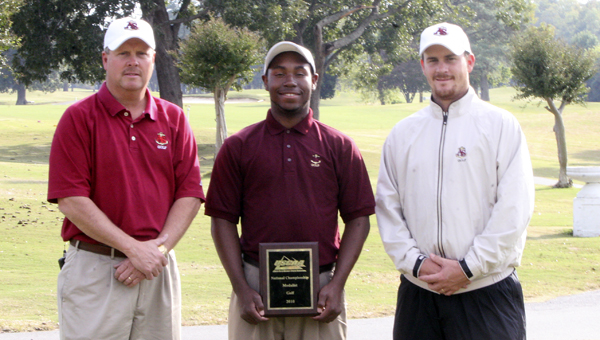 Ben Hunter, center, poses with coaches Joey Maben, left, and B.J. Maben, as well as his plaque for winning medalist honors at the USCAA National Championship in State College, Pa. Hunter, a former Lakeland standout and freshman at The Apprentice School, shot even-par 144 in the tournament, tying B.J. Maben’s school record for a 36-hole tournament.

In the last couple months, collegiate golfers and coaches from far and wide have been finding out something golfers around Suffolk’s courses have known about Ben Hunter since he was a little kid.

“Rochester, Michigan, won the tournament. Their coaches came up to me and said, ‘all the guys who played with him during the tournament said he plays so effortlessly, yet he still beats everyone and he’s a sportsman, too,’” said Apprentice head coach Joey Maben.

Hunter’s been a veteran of Suffolk Golf Course since he was barely more than a toddler. A little down the line, he was Lakeland’s No. 1 golfer for four years, leading the Cavs to an Eastern Region Tournament berth one season and earning multiple individual entries into regional and state tournaments.

Even when the Builders traveled to New York for two events earlier in the season, he was a returning vet, kind of.

“When I was little, we went to see some family up there. I was told I played on a course up there, but I don’t remember that,” Hunter said Monday prior to Apprentice’s practice at Sleepy Hole Golf Course.

Hunter shot an even-par 70 to be medalist at a match in King’s Point, N.Y. for his first event as a Builder.

Hunter shot 70 and 74 on Penn State’s Blue Course to claim the national title. Hunter tied the record of his assistant coach, B.J. Maben, a 2009 Apprentice grad.

“They already have a good relationship working together on the course,” Joey said. “Plus there’s some jabbing versus each other.”

The daily effort required of a student-athlete at Apprentice, which trains future management employees for the Northrop Grumman Newport News Shipyard, is a test all by itself.

“Having to get up very early in the morning to go to work, then having classes, then your sport, it’s a lot different than going to a traditional college,” B.J. said.

“I’m up around 4:30 or 5 in the morning. There’s eight hours at work, then class and practice,” Hunter said.

Travelling for matches is great, says Hunter, not only for the chance to play golf, but for getting a break from early mornings and work.

“I hit a whole lot of greens (in regulation). I hit probably 30 of 36 greens,” Hunter said about nationals. “My putting was horrible. I had five three-putts I think, but from tee to green I did very well.”

Apprentice’s fall season doesn’t end with the national tournament. The Builders will be in the Tom O’Briant Memorial at Guilford College Oct. 25-26. Three of the top NCAA Division III teams in the country, Greensboro, Methodist and Guilford, make it an excellent tournament.

“If Ben plays like he did at Penn State, he has a shot at winning it,” B.J. said.