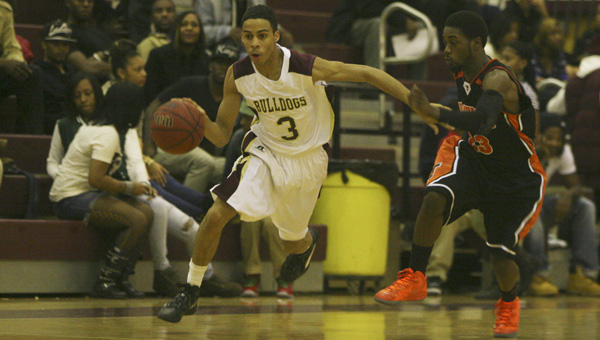 King's Fork junior Akanni White goes by a Churchland guard during KF's 53-46 win over the Truckers in the first round of the King's Fork Christmas Tournament Tuesday night at The Kennel. The victory gives the Bulldogs (5-3) a four-game winning streak.

It remains to be seen if King’s Fork’s defense can win a championship this boys’ hoop season, be it a district title or beyond.

The Bulldogs have made the sporting adage about defense true however, at least for a four-game winning streak including a 53-46 win over Churchland in the first round of the King’s Fork Christmas Tournament Tuesday night.

King’s Fork’s offense sputtered for long stretches against the Truckers. The Bulldogs struggled even when they weren’t guarded — at the foul line, as they were trying to put the game away in the last few minutes.

Strong defense, which came into Tuesday’s contest having allowed 36 points in a win versus Oscar Smith and 43 points in a win against Indian River in the previous two district games, kept the Truckers at bay.

“In the second half we did that OK, but we couldn’t extend the lead because we missed so many opportunities. The guys have to understand, when we fumble a pass or miss a lay-up, it’s the same thing as a turnover,” Worrell said.

Churchland turned the opening period into a faster game than the Bulldogs wanted, but Jacorey Smith’s driving shot with four seconds left made it a 12-12 score after a period.

A Bulldog steal and a big right-handed flush by Smith was big for the home crowd in The Kennel and put KF up 16-14 early in the second. It wasn’t easy, but the Bulldogs led the rest of the way.

Building off a 26-18 halftime lead, the Bulldogs looked inside coming out of the locker room.

Guards Akanni Smith and Rod Parrett made driving buckets. Zach Johnson scored with a turnaround shot in the low post. Raquan Miller turned an offensive board in the paint into a bucket. KF led 36-24 at the 4:50 mark of the third period.

The Truckers scored the next seven points and KF’s offense slumped until midway through the fourth period.

The Bulldogs scored four points while committing 10 turnovers in a span of 8:40 until Smith drove in from the wing and was fouled while banking in a short jumper. Smith made the free throw for a 43-36 KF lead with 4:10 remaining in the game.

“Jacorey can step up and play those important minutes for us. He can be a leader, but sometimes he just has to slow down a little,” Worrell said.

The Bulldogs turned a rebound off a missed Trucker free throw into Johnson throwing down a dunk for a 50-41 Bulldog lead with 1:40 left.

Churchland drew back within five points, 51-46, and had a possession to get closer after Johnson missed the front end of a 1-and-1. Smith grabbed the rebound off a Churchland three-point try, then made two at the line with 0:20 left for what proved to be the final margin.

The Bulldogs (5-3) met Woodside in the semifinals of the King’s Fork Christmas Tournament in the late game of Wednesday’s quadruple header.