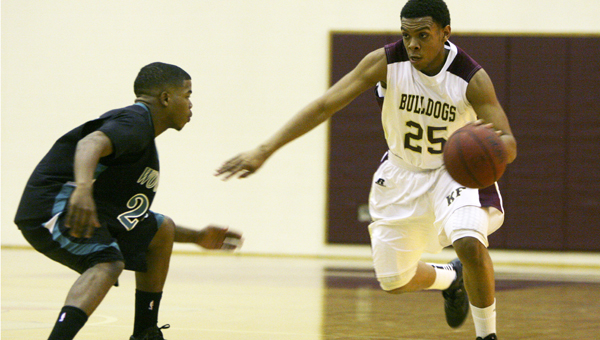 King’s Fork’s Jaylen White dribbles by a Woodside player during Wednesday’s semifinal game in the King’s Fork Christmas Tournament. Woodside outscored the Bulldogs 13-8 in the last 5:40 for a 50-49 win.

King’s Fork led most of the way in its semifinal contest against visiting Woodside only for the Wolverines to get the lead with 1:44 remaining and hold on through Jacorey Smith’s last-second shot in the lane, which was off the mark for the Bulldogs who fell 50-49, Wednesday night in a semifinal of the inaugural King’s Fork Christmas Tournament.

Smith was a key player, scoring 15 points, in KF’s opening-round win against Churchland on Tuesday.

After the Wolverines missed two free throws and the Bulldogs got the ball out of bounds, with the length of the court to go, with 5.0 seconds left, Smith drove 75 feet at full speed and had to try a difficult shot on the move just inside the foul line. 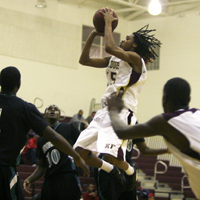 King’s Fork’s Byron Taylor hangs for a shot in the paint during KF’s semifinal contest versus Woodside Wednesday night in the King’s Fork Christmas Tournament in the Kennel. Woodside beat King’s Fork 50-49.

The outcome boiled down to the last second but the Bulldogs, as well as the guests, had plenty of chances to take control of the game before it came down to one final shot.

For starters, the Bulldogs opened the game missing their first 11 field goals. Woodside didn’t take advantage of KF going scoreless and the Wolverines led only 4-2 when Byron Taylor tipped in a missed jumper for KF’s first points with 3:13 left in the first period.

Both sides played patiently all night. KF’s most consistent offense came from senior center Zach Johnson, who’s committed to playing at the U.S. Military Academy in West Point, N.Y. Johnson scored 11 points and grabbed six boards in the first half and KF led 26-21 at the break.

Jaylen White’s drive and lay-up made it 34-27 Bulldogs with 2:30 left in the third period as the pace remained a controlled one. The Bulldogs remained in front, but not by much, until Woodside tied the game 41-41 with 4:24 left to go.

Woodside got a bucket with its next possession, and the next two Bulldog possessions went empty. A charging foul erased what looked like a bucket by Akanni White. After a 1-for-2 trip to the line by the Wolverines, C.J. Hailes drove to the hoop and had his shot blocked, followed by a missed three-pointer by Rod Parrett.

Another Woodside free throw made it 50-47 Wolverines with 0:17 left. Johnson scored off a dish by Akanni White with 8.9 seconds. Woodside’s errant free throws left KF with a chance to win, but the Bulldogs came up shy.

While the game’s pace played into King’s Fork’s usual plan, Woodside’s offense thrived on the half-court game in the second half. The Wolverines made 11-of-18 (61.1 percent) on their field goals after halftime, while the Bulldogs shot 6-of-24 (25.0 percent).